Items related to Girl Cases: Marriage and Colonialism in Gusiiland,... 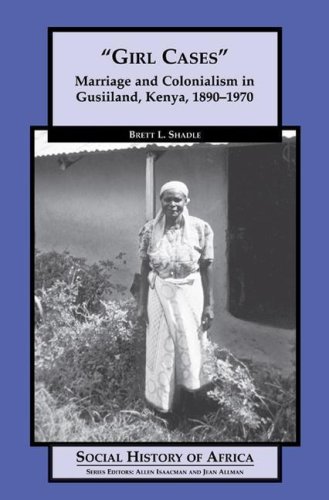 Beginning in the late 1930s, a crisis in colonial Gusiiland developed over traditional marriage customs. Couples eloped, wives deserted husbands, fathers forced daughters into marriage, and desperate men abducted women as wives. Existing historiography focuses on women who either fled their rural homes to escape a new dual patriarchy-African men backed by colonial officials-or surrendered themselves to this new power. Girl Cases: Marriage and Colonialism in Gusiiland, Kenya 1890-1970 takes a new approach to the study of Gusii marriage customs and shows that Gusii women stayed in their homes to fight over the nature of marriage. Gusii women and their lovers remained committed to traditional bridewealth marriage, but they raised deeper questions over the relations between men and women.

During this time of social upheaval, thousands of marriage disputes flowed into local African courts. By examining court transcripts, Girl Cases sheds light on the dialogue that developed surrounding the nature of marriage. Should parental rights to arrange a marriage outweigh women's rights to choose their husbands? Could violence by abductors create a legitimate union? Men and women debated these and other issues in the courtroom, and Brett L. Shadle's analysis of the transcripts provides a valuable addition to African social history.

By drawing upon some 2000 court transcripts, Girl Cases: Marriage and Colonialism in Gusiiland, Kenya 1890-1970 challenges prevailing scholarship surrounding marriage customs in Gusiiland to show that women remained committed to tradition while openly fighting against abuses in the customs.

Brett L. Shadle teaches African History at Virginia Polytechnic Institute and State University. He received his Ph.D. from Northwestern University in 2000, where he worked under Professor Jonathon Glassman. Prior to joining Virginia Tech in 2005, Shadle taught at Bowdoin College and the University of Mississippi. He is currently researching the history of sexual crimes in twentieth-century Kenya, and the history of colonial Kenya's African courts system.

Book Description Praeger 2006-08-30, 2006. Paperback. Condition: Good. Item is in good condition. Some moderate creases and wear. This item may not come with CDs or additional parts including access codes for textbooks. Might be an ex-library copy and contain writing/highlighting. Seller Inventory # DS-0325070946-3