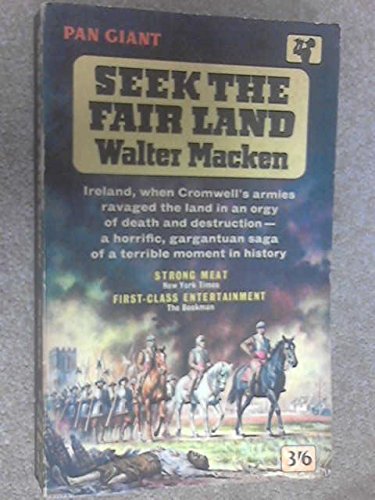 The first book in a trilogy examining the adventures of several generations of one Irish family. Set amidst the Cromwellian Invasions, Seek the Fair Wind begins in 1641. Dominick McMahon, a merchant by trade, has little appetite for fighting, yet is forced to defend his town against Cromwell's army. From dark city streets to wild mountains, from vicious slaughter to triumphant faith, from selfish obedience to heroic opposition this novel paints a vivid portrait of the struggles of the Irish people against the English. Along with The Silent People and The Scorching Wind, Seek the Fair Land is a fascinating examination of the history and events that fueled the fight for freedom in Ireland.

Walter Macken was born in Galway in 1915. He was a writer of short stories, novels and plays. Originally an actor, principally with the Taibhdhearc in Galway, and The Abbey Theatre, he played lead roles on Broadway in M. J. Molloy's The King of Friday's Men and his own play Home Is the Hero. He also acted in films, notably in Arthur Dreifuss' adaptation of Brendan Behan's The Quare Fellow. He is perhaps best known for his trilogy of Irish historical novels Seek the Fair Land, The Silent People and The Scorching Wind. He passed away in 1967.

An explosive segment of history ... contagious emotion ... action-packed entertainment. New York Herald Tribune An adventure story that is both exciting and moving. The Times

Book Description Irish Book Center, 1962. Condition: Good. A+ Customer service! Satisfaction Guaranteed! Book is in Used-Good condition. Pages and cover are clean and intact. Used items may not include supplementary materials such as CDs or access codes. May show signs of minor shelf wear and contain limited notes and highlighting. Seller Inventory # 0330020625-2-4

Book Description Pan Macmillan, United Kingdom, London, 1968. Paperback. Condition: Very Good. The book has been read, but is in excellent condition. Pages are intact and not marred by notes or highlighting. The spine remains undamaged. Seller Inventory # CIN000721461