Items related to The Boston Strangler 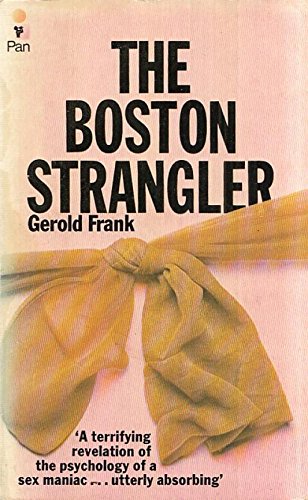 New York Times Bestseller and Winner of the Edgar Award: The definitive account of the notorious serial killer—and the manhunt that followed his rampage.

On June 14, 1962, twenty-five-year-old Juris Slesers arrived at his mother’s apartment to drive her to church. But there was no answer at the door. After waiting a half hour, Juris shoved his way inside. He found fifty-five-year-old Anna Slesers lying on the kitchen floor, dead, the cord of her housecoat knotted tightly around her neck and turned up in a bow.

Between 1962 and 1964, twelve more bodies were discovered in and around Boston: all women, all sexually assaulted, and all strangled—often with their own pantyhose. None of the victims exhibited any signs of struggle, nothing was stolen from their homes, and there were no signs of forcible entry. The police could find no discernable motive or clues. Who was this insane killer? How was he entering women’s homes? And why were they letting him in?

More than a gripping chronicle of an American serial killer on par with Jack the Ripper, The Boston Strangler is a shocking story about what happens to a city under a siege of terror. Drawn from hundreds of hours of personal interviews, as well as police, medical, and court documentation, author Gerold Frank’s grisly, horrifying, and meticulously researched account was awarded the Edgar for Best Fact Crime.

Gerold Frank (1907–1998) was an American author and ghostwriter. Born in Cleveland, Ohio, Frank attended Ohio State University. After graduation, he moved to New York with dreams of becoming a poet, and then moved back to Cleveland to work as a newspaperman. Later, he returned to New York to work for the Journal-American. During World War II, Frank was a war correspondent in the Middle East. He won two Edgar Awards for Best Fact Crime, for his books The Deed and The Boston Strangler, the latter of which was adapted into a film starring Tony Curtis. He was a pioneer of the contemporary literary form of the as-told-to celebrity biography. Frank’s books number in the dozens, and include collaborations with Lillian Roth, Mike Connolly, Diana Barrymore, Zsa Zsa Gabor, and Judy Garland.

“Stock up and stand back. . . . It takes will power to lay the book down, almost as much as it would have required of the victims to keep their doors closed to the man who said he’d been sent to repair their plumbing and repaint their apartments. . . . It is a mad genius stroke and Frank’s book will contribute to a legend and literature of America’s Jack the Ripper.” —Kirkus Reviews

“One of the most remarkable chronicles of true crime ever published. A classic in its genre!” —John Barkham Reviews

“A superb true crime account . . . The book tells a sensational story; it tells it simply, candidly, faithfully, and as completely as one could want. Chilling reading . . . An engrossing book and creepy tale.” —The New York Times

Book Description Condition: Good. New Impression. Ships from the UK. Former Library book. Shows some signs of wear, and may have some markings on the inside. Seller Inventory # GRP93633726

Shipping: US$ 6.98
From United Kingdom to U.S.A.
Destination, rates & speeds

Book Description Paperback. Condition: Good. All orders are dispatched the following working day from our UK warehouse. Established in 2004, we have over 500,000 books in stock. No quibble refund if not completely satisfied. Seller Inventory # mon0004177729

Shipping: US$ 8.34
From United Kingdom to U.S.A.
Destination, rates & speeds

Book Description Paperback. Condition: Very Good. Boston Strangler This book is in very good condition and will be shipped within 24 hours of ordering. The cover may have some limited signs of wear but the pages are clean, intact and the spine remains undamaged. This book has clearly been well maintained and looked after thus far. Money back guarantee if you are not satisfied. See all our books here, order more than 1 book and get discounted shipping. Seller Inventory # 7719-9780330021401

Book Description Paperback. Condition: Very Good. Shipped within 24 hours from our UK warehouse. Clean, undamaged book with no damage to pages and minimal wear to the cover. Spine still tight, in very good condition. Remember if you are not happy, you are covered by our 100% money back guarantee. Seller Inventory # 6545-9780330021401

Book Description Condition: Good. A+ Customer service! Satisfaction Guaranteed! Book is in Used-Good condition. Pages and cover are clean and intact. Used items may not include supplementary materials such as CDs or access codes. May show signs of minor shelf wear and contain limited notes and highlighting. Seller Inventory # 0330021400-2-4

Book Description Softcover / Paperback. Condition: Good. 5th or later edition. Paperback. The incredible hunt for the Boston Strangler began in June 1962 when Mrs. Anna Slesars was brutally molested and strangled in her Boston apartment. Within the next 19 months, 12 more women were found sexually assaulted and murdered without a single clue to their killer. One of the greatest manhunts in the history of modern crime, spanning 3-yrs. 414pp. p/back. G+. Seller Inventory # 2197

Shipping: US$ 24.36
From United Kingdom to U.S.A.
Destination, rates & speeds