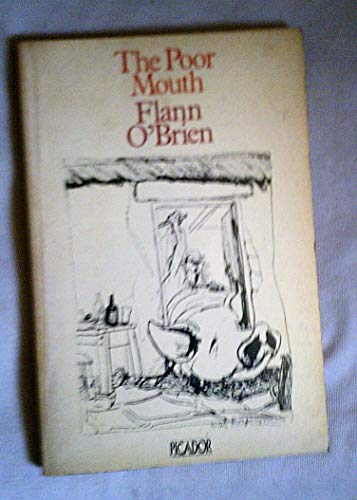 The Poor Mouth relates the story of one Bonaparte O'Coonassa, born in a cabin in a fictitious village called Corkadoragha in western Ireland equally renowned for its beauty and the abject poverty of its residents. Potatoes constitute the basis of his family's daily fare, and they share both bed and board with the sheep and pigs. A scathing satire on the Irish, this work brought down on the author's head the full wrath of those who saw themselves as the custodians of Irish language and tradition when it was first published in Gaelic in 1941.

Flann O'Brien, whose real name was Brian O'Nolan, also wrote under the pen name of Myles na Gopaleen. He was born in 1911 in County Tyrone. A resident of Dublin, he graduated from University College after a brilliant career as a student (editing a magazine called Blather) and joined the Civil Service, in which he eventually attained a senior position. He wrote throughout his life, which ended in Dublin on April 1, 1966. His other novels include The Dalkey Archive, The Third Policeman, The Hard Life, and The Poor Mouth, all available from Dalkey Archive Press. Also available are three volumes of his newspaper columns: The Best of Myles, Further Cuttings from Cruiskeen Lawn, and At War.

RALPH STEADMAN was born in 1936. He began his career as a cartoonist, and through the years has diversified into many creative fields. Ralph collaborated with Dr Hunter S. Thompson in the birth of 'gonzo' journalism, with "Fear and Loathing in Las Vegas"; he has illustrated classics such as "Alice in Wonderland", "Treasure Island" and "Animal Farm, "and written and illustrated his own books, which include "Sigmund Freud", "I Leonardo" and "The Big I Am". Steadman is also a printmaker, and has travelled the world's vineyards, culminating in his books "The Grapes of Ralph", "Untrodden Grapes" and "Still Life with Bottle. "Steadman's recent books for Bloomsbury include his epic collection of bird illustrations, "Extinct Boids. "
""

Powers grew up in Tipperary County, Ireland, where he was a teacher in Ballyneale National School.

Book Description Picador, 1975. Condition: Good. Illlustrated (illustrator). A+ Customer service! Satisfaction Guaranteed! Book is in Used-Good condition. Pages and cover are clean and intact. Used items may not include supplementary materials such as CDs or access codes. May show signs of minor shelf wear and contain limited notes and highlighting. Seller Inventory # 0330245848-2-4

Shipping: US$ 22.23
From United Kingdom to U.S.A.
Destination, rates & speeds

Book Description Picador, 1975. Paperback. Condition: Very Good. No Jacket. Illlustrated (illustrator). This is a translation of Brian Nolan's satirical work first published in 1941 in Gaelic, which comments mercilessly on Irish life. It is a send-up of "Irishry." Notes to rear. Seller Inventory # J0023

Shipping: US$ 21.54
From United Kingdom to U.S.A.
Destination, rates & speeds

Book Description Pan Macmillan, United Kingdom, London, 1975. Paperback. Condition: Good. Illlustrated (illustrator). The book has been read but remains in clean condition. All pages are intact and the cover is intact. Some minor wear to the spine. Seller Inventory # GOR001198055