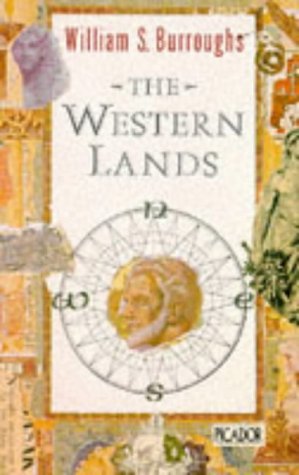 Burroughs's eagerly awaited final novel in the trilogy begun with Cities of the Red Night and The Place of Dead Roads is a profound, revealing, and often astonishing meditation on mortality, loneliness, nuclear peril, and the inextinguishable hope for life after death.

The trilogy that began with Cities of the Red Night (1981) and continued with The Place of Dead Roads (1983) is completed here, and the result is a divine comedy. Although this final volume is a significant work on its own merits, one must wade through the chaotic and at times unintelligible Cities and the more coherent though by no means easy Place to fully understand why The Western Lands is a remarkable achievement. While the plot resists encapsulation, in general terms it concerns the search for eternal rest that is symbolized by the Western Lands of Egyptian mythology. Among those involved in the quest are many characters from the earlier books in the trilogy, as well as a few from Naked Lunch; not the least of them is Burroughs himself. While Burroughs's ability to create and describe vast, hellish landscapes has never been denied, often there has been no character with whom the reader can empathize. Here, however, an empathetic bond is established in passages describing the fear of death, where Burroughs speaks more directly than usual, sometimes in the guise of old, forgotten novelist William Seward Hall, sometimes forthrightly and freely in his authorial voice. As a result, Burroughs fans will find this narrative vivid, horrifying, beautiful and sad.
Copyright 1987 Reed Business Information, Inc.

Book Description Pan Macmillan, 2006. Condition: Good. Ships from the UK. Former Library book. Shows some signs of wear, and may have some markings on the inside. Seller Inventory # GRP77873672

Shipping: US$ 5.59
From United Kingdom to U.S.A.
Destination, rates & speeds

Book Description Picador, 1988. Paperback. Condition: Good. All orders are dispatched the following working day from our UK warehouse. Established in 2004, we have over 500,000 books in stock. No quibble refund if not completely satisfied. Seller Inventory # mon0004466113

Shipping: US$ 8.38
From United Kingdom to U.S.A.
Destination, rates & speeds

Book Description Picador 02/12/1988, 1988. Condition: Very Good. Shipped within 24 hours from our UK warehouse. Clean, undamaged book with no damage to pages and minimal wear to the cover. Spine still tight, in very good condition. Remember if you are not happy, you are covered by our 100% money back guarantee. Seller Inventory # 6545-9780330305112

Book Description -, 1988. Paperback. Condition: Very Good. The Western Lands (Picador Books) This book is in very good condition and will be shipped within 24 hours of ordering. The cover may have some limited signs of wear but the pages are clean, intact and the spine remains undamaged. This book has clearly been well maintained and looked after thus far. Money back guarantee if you are not satisfied. See all our books here, order more than 1 book and get discounted shipping. Seller Inventory # 7719-9780330305112

Book Description Picador, 1988. Paperback. Condition: Used; Good. **Simply Brit** Shipped with Premium postal service within 24 hours from the UK with impressive delivery time. We have dispatched from our book depository; items of good condition to over ten million satisfied customers worldwide. We are committed to providing you with reliable and efficient service at all times. Seller Inventory # 1047903

Shipping: US$ 9.51
From United Kingdom to U.S.A.
Destination, rates & speeds

Book Description Pan MacMillan, 1988. Paperback. Condition: Very Good. The book has been read, but is in excellent condition. Pages are intact and not marred by notes or highlighting. The spine remains undamaged. Seller Inventory # GOR001405338

Book Description Pan MacMillan, 1988. Condition: Good. A+ Customer service! Satisfaction Guaranteed! Book is in Used-Good condition. Pages and cover are clean and intact. Used items may not include supplementary materials such as CDs or access codes. May show signs of minor shelf wear and contain limited notes and highlighting. Seller Inventory # 0330305115-2-4