Items related to All The Pretty Horses

McCarthy, Cormac All The Pretty Horses

All The Pretty Horses 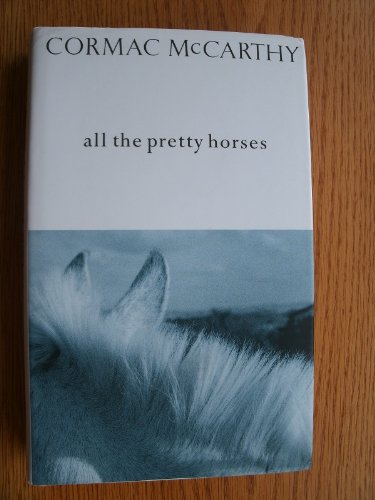 Set in 1949, this is the story of John Grady Cole, who, at the age of sixteen, finds himself at the losing end of a long generation of ranchers. His grandfather's death has just cut him off from the only life he has ever imagined wanting. Abandoned by his parents troubles, heading over the border seems the only way out of a society moving in all of the wrong directions so, with his friend Rawlins, he rides away. Soon enough, they acquire a hapless younger companion and jobs breaking horses on a hacienda. Within months, one of the boys is dead and childhood has passed for the other two, along with an era that once uniquely defined America. This is, indisputably a timeless masterpiece.

Part bildungsroman, part horse opera, part meditation on courage and loyalty, this beautifully crafted novel won the National Book Award in 1992. The plot is simple enough. John Grady Cole, a 16-year-old dispossessed Texan, crosses the Rio Grande into Mexico in 1949, accompanied by his pal Lacey Rawlins. The two precocious horsemen pick up a sidekick--a laughable but deadly marksman named Jimmy Blevins--encounter various adventures on their way south and finally arrive at a paradisiacal hacienda where Cole falls into an ill-fated romance. Readers familiar with McCarthy's Faulknerian prose will find the writing more restrained than in Suttree and Blood Meridian. Newcomers will be mesmerized by the tragic tale of John Grady Cole's coming of age.

Book Description Paperback. Condition: Very Good. Set in West Texas in the years following World War II. A grandfather dies, parents flounder in their own worries and desires and the boy, John Grady Cole, is cut off from the only life - ranching - he ever wanted. So, with his friend Lacy, he decides to go to Mexico. The book has been read, but is in excellent condition. Pages are intact and not marred by notes or highlighting. The spine remains undamaged. Seller Inventory # GOR001328421

All The Pretty Horses - Volume One - The Border Trilogy

Shipping: US$ 10.67
From United Kingdom to U.S.A.
Destination, rates & speeds

Shipping: US$ 32.01
From United Kingdom to U.S.A.
Destination, rates & speeds

All the Pretty Horses

Book Description Hardcover. Condition: As New. Dust Jacket Condition: Near Fine. 1st Edition. 1st UK edition ( first published in US in 1992), 1st impression, unread, not price clipped, no owner's name or other inscription, D/j is somewhat grubby to front and rear but D/j has no tears or nicks and is now protected by clear removable sleeve. Seller Inventory # 02904

Shipping: US$ 39.35
From United Kingdom to U.S.A.
Destination, rates & speeds

All The Pretty Horses