Items related to All the Pretty Horses (UK edition)

All the Pretty Horses (UK edition) 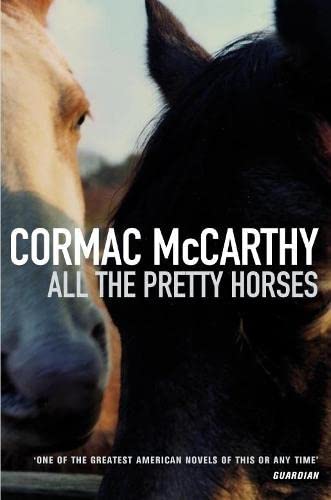 This is volume one of the "Border" triology. John Grady Cole is the last bewildered survivor of long generations of Texas ranchers. Finding himself cut off from the only life he has ever wanted, he sets out for Mexico with his friend Lacey Rawlins. Befriending a third boy on the way, they find a country beyond their imagining: barren and beautiful, rugged yet cruelly civilized; a place where dreams are paid for in blood. "All The Pretty Horses" is an acknowledged masterpiece and a grand love story: a novel about childhood passing, along with innocence and a vanished American age. Steeped in the wisdom that comes only from loss, it is a magnificent parable of responsibility, revenge and survival. 'A darkly shining work ...executed with consummate skill and much subtlety the effect is magnificent' - John Banville, "Observer". 'A uniquely brilliant book ...told in language as subtly beautiful as its desert setting. One of the most important pieces of American writing of our time' - Stephen Amidon, "Sunday Times".

Part bildungsroman, part horse opera, part meditation on courage and loyalty, this beautifully crafted novel won the National Book Award in 1992. The plot is simple enough. John Grady Cole, a 16-year-old dispossessed Texan, crosses the Rio Grande into Mexico in 1949, accompanied by his pal Lacey Rawlins. The two precocious horsemen pick up a sidekick--a laughable but deadly marksman named Jimmy Blevins--encounter various adventures on their way south and finally arrive at a paradisiacal hacienda where Cole falls into an ill-fated romance. Readers familiar with McCarthy's Faulknerian prose will find the writing more restrained than in Suttree and Blood Meridian. Newcomers will be mesmerized by the tragic tale of John Grady Cole's coming of age.

All the Pretty Horses (UK edition)

ALL THE PRETTY HORSES (UK EDITIO