Items related to The Kidnapping of Edgardo Mortara

Kertzer, David I. The Kidnapping of Edgardo Mortara

The Kidnapping of Edgardo Mortara 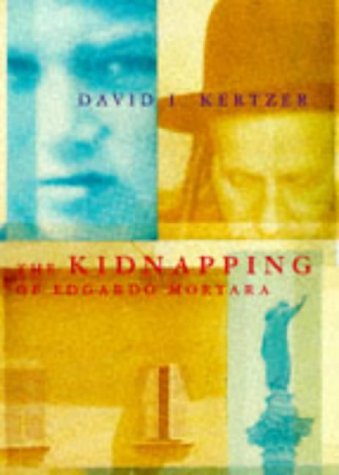 Soon to be a major motion picture from Steven Spielberg.

The extraordinary story of how the vatican's imprisonment of a six-year-old Jewish boy in 1858 helped to bring about the collapse of the popes' worldly power in Italy.

Bologna: nightfall, June 1858. A knock sounds at the door of the Jewish merchant Momolo Mortara. Two officers of the Inquisition bust inside and seize Mortara's six-year-old son, Edgardo. As the boy is wrenched from his father's arms, his mother collapses.  The reason for his abduction: the boy had been secretly "baptized" by a family servant.  According to papal law, the child is therefore a Catholic who can be taken from his family and delivered to a special monastery where his conversion will be completed.
With this terrifying scene, prize-winning historian David I. Kertzer begins the true story of how one boy's kidnapping became a pivotal event in the collapse of the Vatican as a secular power.  The book evokes the anguish of a modest merchant's family, the rhythms of daily life in a Jewish ghetto, and also explores, through the revolutionary campaigns of Mazzini and Garibaldi and such personages as Napoleon III, the emergence of Italy as a modern national state.  Moving and informative, the Kidnapping of Edgardo Mortara reads as both a historical thriller and an authoritative analysis of how a single human tragedy changed the course of history.

Out of seemingly small events are sometimes born great historical moments. The case of young Edgardo Mortara is one. In 1858 the 6-year-old Jewish boy was taken from his parents' home in Bologna, Italy, by agents of the Papal inquisition. The year before, seriously ill, Edgardo had been secretly baptized, by the Mortaras' Catholic servant (or so she claimed); it was against the law for baptized Christians to be raised by Jews, and so, in the eyes of the Church, the kidnapping was only just. Secular Italians did not agree, and thus was set in motion a series of reforms that ended the Church's temporal power in Italy and forged the creation of a liberal, near-democratic state. For his part, young Edgardo became a priest and lived in a Belgian abbey until 1940--just before the invading Germans began to deport and execute all those tainted with Jewish blood. David Kertzer has shaped a remarkable narrative from almost forgotten events.

"National Book Award Finalist
Bologna, 1858: A police posse, acting on the orders of a Catholic inquisitor, invades the home of a Jewish merchant, Momolo Mortara, wrenches his crying six-year-old son from his arms, and rushes him off in a carriage bound for Rome. His mother is so distraught that she collapses and has to be taken to a neighbor's house, but her weeping can be heard across the city. With this terrifying scene--one that would haunt this family forever--David I. Kertzer begins his fascinating investigation of the dramatic kidnapping, and shows how the deep-rooted antisemitism of the Catholic Church would eventually contribute to the collapse of its temporal power in Italy. As Edgardo's parents desperately search for a way to get their son back, they learn why he--out of all their eight children--was taken. Years earlier, the family's Catholic serving girl, fearful that the infant might die of an illness, had secretly baptized him (or so she claimed). Edgardo recovered, but when the story reached the Bologna Inquisitor, the result was his order for Edgardo to be seized and sent to a special monastery where Jews were converted into good Catholics. His justification in Church teachings: No Christian child could be raised by Jewish parents. The case of Edgardo Mortara became an international cause celebre. Although such kidnappings were not uncommon in Jewish communities across Europe, this time the political climate had changed. As news of the family's plight spread to Britain, where the Rothschilds got involved, to France, where it mobilized Napoleon III, and even to America, public opinion turned against the Vatican. The fate of this one boy came to symbolize the entirerevolutionary campaign of Mazzini and Garibaldi to end the dominance of the Catholic Church and establish a modern, secular Italian state. A riveting story which has been remarkably ignored by modern historians--The Kidnapping of Edgardo Mortara will prompt intense interest and discussion as it lays bare attitudes of the Catholic Church that would have such enormous consequences in the twentieth century.

1. The Kidnapping of Edgardo Mortara [Hardcover] Kertzer, David I.