Items related to India After Gandhi 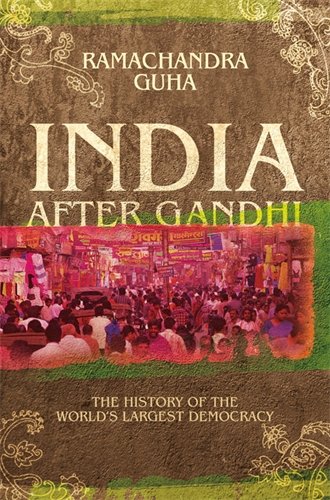 Born against a background of privation and civil war, divided along lines of caste, class, language and religion, independent India emerged, somehow, as a united and democratic country. Ramachandra Guhas hugely acclaimed book tells the full storythe pain and the struggle, the humiliations and the gloriesof the worlds largest and least likely democracy. While India is sometimes the most exasperating country in the world, it is also the most interesting. Ramachandra Guha writes compellingly of the myriad protests and conflicts that have peppered the history of free India. Moving between history and biography, the story of modern India is peopled with extraordinary characters. Guha gives fresh insights on the lives and public careers of those longserving Prime Ministers, Jawaharlal Nehru and Indira Gandhi. But the book also writes with feeling and sensitivity about lesser known (though not necessarily less important) Indianspeasants, tribals, women, workers, and musicians. Massively researched and elegantly written, India After Gandhi is a remarkable account of Indias rebirth, and a work already hailed as a masterpiece of single volume history.

Ramachandra Guha's books cover a wide range of themes: they include a global history of environmentalism, a biography of an anthropologist-activist, a social history of Indian cricket, and a social history of Himalayan peasants. His entire career, he says, seems in retrospect to have been an extended (and painful) preparation for the writing of India After Gandhi.

A toast to India on its 60th birthday: No country has more heroically pursued the promise of democracy. Against the odds of staggering poverty, conflicting religious passions, linguistic pluralism, regional separatism, caste injustice and natural resource scarcity, Indians have lifted themselves largely by their own sandal straps to become a stalwart democracy and emerging global power. India has risen with epic drama -- a nonviolent struggle for independence followed by mass mayhem and bloodletting, dynastic succession and assassination, military victory and defeat, starvation succeeded by green revolution, political leaders as saints, sinners and sexual ascetics. And yet, the Indian story rarely has been told and is practically unknown to Americans.

India After Gandhi masterfully fills the void. India needs a wise and judicious narrator to convey its scale, diversity and chaos -- to describe the whirlwind without getting lost in it. It needs a biographer neither besotted by love nor enraged by disappointment. Ramachandra Guha, a historian who has taught at Stanford and Yale and now lives in Bangalore, has given democratic India the rich, well-paced history it deserves.

Much will be new to American readers. Large-scale conflicts in India's northeast between tribal groups and the center have been as enduring, and in some ways as important, as the more familiar violence in Kashmir. The framing of India's constitution from 1946 through 1949 should induce awe, especially in light of Iraq's post-Saddam experience.

In the midst of Hindu-Muslim bloodshed, a flood of 8 million refugees, starvation, and other profound conflicts, Indian representatives worked out constitutional provisions to protect minorities, keep religion out of state power, correct thousands of years of caste discrimination and redistribute power and wealth accumulated by still-regnant princely states. This was done with no external guidance or pressure. The drafting committee was chaired by an "untouchable," B.R. Ambedkar -- analogies are inexact, but imagine if James Madison at the Philadelphia Constitutional Convention had been a freed slave.

Specialists will quicken over insights from the private papers of Indira Gandhi's confidant, P.N. Haksar, who gave his papers to Guha. These documents reveal, among other things, that it was the Soviet Union that proposed the 1971 treaty of cooperation and friendship between the two countries, and that suspicion of China motivated both nations more than was appreciated at the time.

Some themes go under-explored: For example, why has the Indian Army abstained from interfering in politics, unlike the military in many other developing countries? And why has India given short shrift to primary education, even as it has developed technological institutes that rival M.I.T?

Many chapters begin or end with India's future in doubt. "India is almost infinitely depressing," Aldous Huxley wrote in 1961, "for there seems to be no solution to its problems in any way that any of us [in the West] regard as acceptable." He predicted that "when Nehru goes, the government will become a military dictatorship." Guha records that "ever since the country was formed there have also been many Indians who have seen the survival of India as being on the line, some (the patriots) speaking or writing in fear, others (the secessionists or revolutionaries) with anticipation."

Yet, marvelously, India's survival as a democracy seems more assured than ever. Less clear is the nature of its relationship with America. Since 2005, the U.S. and Indian governments have moved toward nuclear cooperation, reversing 30 years of U.S. policy against nuclear assistance to countries that refuse to sign the Nuclear Nonproliferation Treaty.

In 1962, China crossed disputed boundaries in the northwest and northeast of India. A shocked Prime Minister Jawaharlal Nehru abandoned nonalignment and pleaded for emergency U.S. military assistance. Ambassador John Kenneth Galbraith wrote to President Kennedy: "The only Asian country which really stands in [China's] way is India and pari passu the only Western country that is assuming responsibility is the United States. . . . We should expect to make use of India's political position, geographical position, political power and manpower or anyhow ask."

Four decades later, another Harvard professor-cum-American ambassador to India, Robert Blackwill, championed the proposed nuclear deal with similar reasoning. As different as the presidents they served, Blackwill and Galbraith were tempted by strategic abstraction and a desire to raise "their" country -- India -- in American priorities. Yet supplying arms to India in 1962 did not make India any more deferential to U.S. foreign policy. Washington will delude itself again if it thinks that nuclear India will be a pliant instrument in its geostrategy. As long as India is a democracy, it will go its own way.

To comprehend India's achievement, imagine if Mexico became the 51st of the United States, followed by Brazil, Argentina and the rest of Central and South America. Add Egypt, Saudi Arabia and Bahrain to give this union the Sunni-Shia mix of India. The population then represented in Congress would still be smaller and less diverse linguistically, religiously, culturally and economically than India's. If such a state could democratically manage the interests and conflicts swirling within it, and not threaten its neighbors, the world should ask little else from it. If we were such a state, we would feel that our humane progress contributes so much to global well-being that smaller, richer, easier-to-manage states should not presume to tell us what to do.

Sixty years after Gandhi, India has earned greater appreciation than we give it.

Buy Used
Condition: Fair
Binding and pages have been heavily... Learn more about this copy

Book Description Pan Books, 2008. Condition: Acceptable. Binding and pages have been heavily repaired and reinforced with tape, has tape and stickers on the cover, as well as marks and notes on the pages. Definitely not pretty, but it's a working copy at a great price that ships fast. ~ Book does NOT contain an access code or CD. Seller Inventory # #59C-00003

Book Description Pan Books, 2008. Condition: Good. A+ Customer service! Satisfaction Guaranteed! Book is in Used-Good condition. Pages and cover are clean and intact. Used items may not include supplementary materials such as CDs or access codes. May show signs of minor shelf wear and contain limited notes and highlighting. Seller Inventory # 0330396110-2-4

3. India After Gandhi: The History of the World's Largest Democracy

4. India After Gandhi: The History of the World's Largest Democracy

Book Description Pan 01/08/2008, 2008. Condition: Very Good. This book is in very good condition and will be shipped within 24 hours of ordering. The cover may have some limited signs of wear but the pages are clean, intact and the spine remains undamaged. This book has clearly been well maintained and looked after thus far. Money back guarantee if you are not satisfied. See all our books here, order more than 1 book and get discounted shipping. . Seller Inventory # 7719-9780330396110

5. India After Gandhi: The History of the World's Largest Democracy

Book Description Pan Books, 2008. Paperback. Condition: Very Good. The book has been read, but is in excellent condition. Pages are intact and not marred by notes or highlighting. The spine remains undamaged. Seller Inventory # GOR002269791

6. India After Gandhi: The History of the World's Largest Democracy

Book Description Pan Books, 2008. Paperback. Condition: Good. The book has been read but remains in clean condition. All pages are intact and the cover is intact. Some minor wear to the spine. Seller Inventory # GOR002648406