Items related to Mia Goes Forth (The Princess Diaries)

Mia Goes Forth (The Princess Diaries) 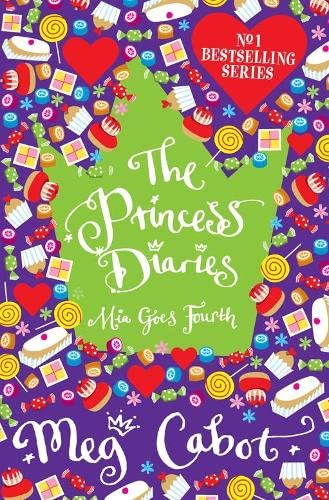 Mia and Michael are finally an item, but Grandmere seems to have other plans. Just before the happy couple's first hot date, an unmissable royal engagement turns up. Could it be that Michael doesn't measure up and that (please not!) Grandmere's got someone else in mind for Princess Amelia Mignonette Grimaldi Thermopolis Renaldo?

The fourth volume in Meg Cabot's popular Princess Diaries series, Princess in Waiting begins in the tiny country of Genovia, where 14-year-old Mia, the unlikely royal, is on winter break trying not to bite her fingernails. Being a princess and fighting for the installation of parking meters is tough, when all you really want to do is go back to your regular life in New York City and see your dreamy boyfriend Michael. Of course, Mia is soon back in the city, trying not to fail Algebra II and trying to stay afloat in a sea of self-doubt. Could it be true that she is merely a "massive reject" covered with orange cat hair? For that matter, is finding her missing lucky Queen Amidala underwear as important as finding her secret talent? Mia's frank, funny diary entries range from "Things to Do" lists ("Stop obsessing over whether or not Michael loves you vs. being in love with you"); lists of the valuable lessons of romantic heroines ("3. Elizabeth Bennet from Pride and Prejudice: Boys like it when you are smart-alecky."); transcripts of instant-messaging rounds with Michael; to poems ("Like the Millenium Falcon in hyperdrive/ our love will continue to thrive and thrive") and general irrational tirades. Whether or not Mia ever achieves her much-sought-after "self-actualization," teens will enjoy reading her over-the-top, up-to-the-minute-hip diary. (Ages 12 and older) --Karin Snelson

Never before has the world seen such a Princess.

Nor have her own subjects, for that matter. But Genovian politics are nothing next to Mia's real troubles. Between canceled dates with her long-sought-after royal consort, a second semester of the dreaded Algebra, more princess lessons from Grandmère, and the inability to stop gnawing on her fingernails, isn't there anything Mia is good at besides inheriting an unwanted royal title?

4. MIA GOES FORTH (THE PRINCESS DIA