Items related to The Wonder That Was India

A.L. Basham The Wonder That Was India

The Wonder That Was India 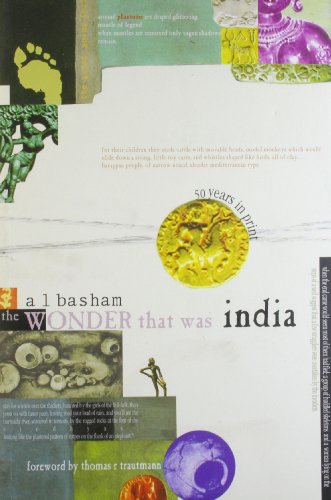 Indian civilization is among the oldest in the world, and what is unique in that respect is that the culture of the peoples still remains largely unchanged, with a strong thread of continuity through the ages.

The author also discusses the Aryan invasion theory, supporting it with various research papers and findings of that time. The evolution of Hindu religion is also talked about in this book from the Harappan times, to the coming of the Aryans and the mutual influence that Hinduism and its off shoots Jainism and Buddhism had on each other.

This book is comprehensive in its coverage of Indian history. It looks at every aspect of Indian society and culture. The Wonder That was India covers everything from religion, governance, social evolution, literary traditions, philosophy languages, and science.

The author explores the significant role the Hindu religion played on the lives of the people. All the literary compositions of ancient times had religious associations. He also puts forward the theory that the European gypsies are of Indian origin.

The Wonder That Was India also gives an insight into modern Indian society and culture, how it became a confluence of different influences from many a quarter throughout the many stages of its history.

Arthur Llewellyn Basham was an Indologist and a professor at London s School of Oriental and African Studies.

Basham wrote many books on India, including A Cultural History of India and The Sharqi Sultanate Of Jaunpur. He also co-authored The Origins and Development of Classical Hinduism, Religious Beliefs and Practices of North India During the Early Medieval Period, and History and Doctrines of the Ajivikas:A Vanished Indian Religion. But his most popular work is the book The Wonder That Was India.

The author was born in 1914 in Essex. His father had served in the Indian Army and told him a lot of stories about India that sparked an interest in him about the country. Basham was interested in studying various religions, from Christianity to Hinduism, Buddhism, and Islam. The author obtained a degree in Sanskrit from the School of Oriental and African Studies. He served in the Civil Defence department during the Second World War. After the war, he did a doctorate at the School of Oriental and African studies and later became a Professor at that college. In 1965, Basham left SOAS to join the Australia National University, where he became the Head of the History Department and also Professor of Oriental Civilizations

Buy Used
Condition: Very Good
AL Basham's The Wonder that was... Learn more about this copy

1. The Wonder that was India: Volume 1

Book Description Pan Macmillan, United Kingdom, London, 2004. Paperback. Condition: Very Good. AL Basham's The Wonder that was India is a brilliant early history of one of the oldest civilisations. When it was first published in the United Kingdom in 1954, it became an instant hit, as it would in the United States a few years later. Since then it has consistently found an avid readership all over the world, been translated into many languages, and has educated and entertained generations of general readers, serious students and travellers to India. This edition celebrates its fifty years in print with a foreword by Thomas R Trautmann, professor at the University of Michigan and once Basham's student, which brings alive the man and the academic behind this cherished volume and illuminates the historical influences upon it. The book has been read, but is in excellent condition. Pages are intact and not marred by notes or highlighting. The spine remains undamaged. Seller Inventory # GOR003807381

2. The Wonder That Was India

Shipping: US$ 27.82
From United Kingdom to U.S.A.
Destination, rates & speeds

3. The Wonder that was India: Volume 1 [Paperback] Basham, A

4. The Wonder that was India: Volume 1

Book Description Picador, 2014. Paperback. Condition: Very Good. The book has been read, but is in excellent condition. Pages are intact and not marred by notes or highlighting. The spine remains undamaged. Seller Inventory # CIN000583366

5. The Wonder That Was India

Book Description Picador, 2014. Condition: Good. A+ Customer service! Satisfaction Guaranteed! Book is in Used-Good condition. Pages and cover are clean and intact. Used items may not include supplementary materials such as CDs or access codes. May show signs of minor shelf wear and contain limited notes and highlighting. Seller Inventory # 033043909X-2-4