Items related to The Emperor's Children 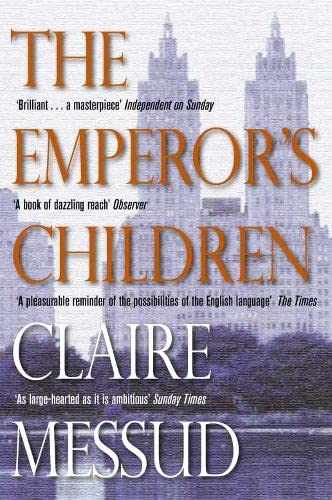 Claire Messud was educated at Cambridge and Yale. Her first novel, When the World Was Steady, and her most recent book, The Hunters, were both finalists for the PEN/Faulkner Award; her second novel, The Last Life, was a Publishers Weekly Best Book of the Year and Editor's Choice at The Village Voice. All three of her books were New York Times Notable Books of the Year. She has been awarded a Guggenheim Fellowship and a Radcliffe Fellowship, and is the current recipient of the Straus Living Award from the American Academy of Arts and Letters. She lives in Somerville, Massachusetts, with her husband and children.

Our Chef Is Very Famous in London

Darlings! Welcome! And you must be Danielle?” Sleek and small, her wide eyes rendered enormous by kohl, Lucy Leverett, in spite of her resemblance to a baby seal, rasped impressively. Her dangling fan earrings clanked at her neck as she leaned in to kiss each of them, Danielle too, and although she held her cigarette, in its mother-of-pearl holder, at arm’s length, its smoke wafted between them and brought tears to Danielle’s eyes.

Danielle didn’t wipe them, for fear of disturbing her makeup. Having spent half an hour putting on her face in front of the grainy mirror of Moira and John’s bathroom, ogling her imperfections and applying vigorous remedial spackle—beneath which her weary, olive-shaped eyes were pouched by bluish bags, the curves of her nostrils oddly red, and her high forehead peeling—she had no intention of revealing to strangers the disintegration beneath her paint.

“Come in, darlings, come in.” Lucy moved behind them and herded the trio toward the party. The Leveretts’ living room was painted a deep purple—aubergine, in local parlance—and its windows were draped with velvet. From the ceiling hung a brutal wrought iron chandelier, like something salvaged from a medieval castle. Three men loitered by the bay window, talking to one another while staring out at the street, their glasses of red wine luminous in the reflected evening light. A long, plump, pillowed sofa stretched the length of one wall, and upon it four women were disposed like odalisques in a harem. Two occupied opposite ends of the divan, their legs tucked under, their extended arms caressing the cushions, while between them one rested her head upon another’s lap, and smiling, eyes closed, whispered to the ceiling while her friend stroked her abundant hair. The whole effect was, for Danielle, faintly cloudy, as if she had walked into someone else’s dream. She kept feeling this, in Sydney, so far from home: she couldn’t quite say it wasn’t real, but it certainly wasn’t her reality.

“Rog? Rog, more wine!” Lucy called to the innards of the house, then turned again to her guests, a proprietorial arm on Danielle’s bicep. “Red or white? He’s probably even got pink, if you’re after it. Can’t bear it myself—so California.” She grinned, and from her crows’ feet, Danielle knew she was forty, or almost.

Two men bearing bottles emerged from the candlelit gloom of the dining room, both slender, both at first glance slightly fey. Danielle took the imposing one in front, in a pressed lavender shirt and with, above hooded eyes, a high, smooth Nabokovian brow, to be her host. She extended a hand. “I’m Danielle.” His fingers were elegant, and his palm, when it pressed hers, was cool.

The other man, at least a decade older, slightly snaggletoothed and goateed, spoke from behind his shoulder. “I’m Roger,” he said. “Good to see you. Don’t mind Ludo, he’s playing hard to get.”

“Good choice,” said Seeley, almost in a whisper. He was—she could feel it rather than see it, because his hooded eyes did not so much as flicker—looking her up and down. She hoped that her makeup was properly mixed in, that no clump of powder had gathered dustily upon her chin or cheek.

The moment of recognition was, for Danielle, instantaneous. Here, of all places, in this peculiar and irrelevant enclave, she had spotted a familiar. She wondered if he, too, experienced it: the knowledge that this mattered. Ludovic Seeley: she did not know who he was, and yet she felt she knew him, or had been waiting for him. It was not merely his physical presence, the long, feline slope of him, a quality at once loose and controlled, as if he played with the illusion of looseness. Nor was it the timbre of his voice, deep and yet not particularly resonant, its Australian inflection so slight as to be almost British. It was, she decided, something in his face: he knew. Although what he knew she could not have said. There were the eyes, a surprising deep and gold-flecked gray, their lines slightly downturned in an expression both mournful and amused, and the particular small furrow that cut into his right cheek when he smiled even slightly. His ears, pinned close to his head, lent him a tidy aspect; his dark hair, so closely shaven as to allow the blue of his scalp to shine through, emphasized both his irony and his restraint. His skin was pale, almost as pale as Danielle’s own, and his nose a fine, sharp stretch of cartilage. His face, so distinctive, struck her as that of a nineteenth-century portrait, a Sargent perhaps, an embodiment of sardonic wisdom and society, of aristocratic refinement. And yet in the fall of his shirt, the line of his torso, the graceful but not unmanly movement of his slender fingers (and yes, discreetly, but definitely there, he had hair on the backs of his hands—she held to it, as a point of attraction: men ought not to be hairless), he was distinctly of the present. What he knew, perhaps, was what he wanted.

“Come on, darling.” Lucy took her by the elbow. “Let’s introduce you to the rest of the gang.”
This, dinner at the Leveretts’, was Danielle’s last evening in Sydney before heading home. In the morning, she would board the plane and sleep, sleep her way back to yesterday, or by tomorrow, to today, in New York. She’d been away a week, researching a possible television program, with the help of her friend Moira. It wouldn’t be filmed for months, if it were filmed at all, a program about the relationship between the Aborigines and their government, the formal apologies and amends of recent years. The idea was to explore the possibility of reparations to African Americans—a high-profile professor was publishing a book about it—through the Australian prism. It wasn’t clear even to Danielle whether this could fly. Could an American audience care less about the Aborigines? Were the situations even comparable? The week had been filled with meetings and bluster, the zealous singing exchanges of her business, the pretense of certainty where in fact there was none at all. Moira firmly believed it could be done, that it should be done; but Danielle was not convinced.

Sydney was a long way from home. For a week, in her pleasant waft of alienation, Danielle had indulged the fantasy of another possible life—Moira, after all, had left New York for Sydney only two years before—and with it, another future. She rarely considered a life elsewhere; the way, she supposed, with faint incredulity, most people never considered a life in New York. From her bedroom in her friends’ lacy tin-roofed row house at the end of a shady street in Balmain, Danielle could see the water. Not the great sweep of the harbor, with its arcing bridge, nor the ruffled seagull’s wings of the opera house, but a placid stretch of blue beyond the park below, rippled by the wake of occasional ferries and winking in the early evening sunlight.

Early autumn in Sydney, it was still bitter at home. Small, brightly colored birds clustered in the jacaranda trees, trilling their joyous disharmonies. In earliest morning, she had glimpsed, against a dawn-dappled shrub in the backyard, an enormous dew-soaked spiderweb, its intricacies sparkling, and poised, at its edge, an enormous furry spider. Nature was in the city, here. It was another world. She had imagined watching her 747 soar away without her, a new life beginning.

But not really. She was a New Yorker. There was, for Danielle Minkoff, only New York. Her work was there, her friends were there—even her remote acquaintances from college at Brown ten years ago were there—and she had made her home in the cacophonous, cozy comfort of the Village. From her studio in its bleached-brick high-rise at Sixth Avenue and Twelfth Street, she surveyed lower Manhattan like a captain at the prow of her ship. Beleaguered and poor though she sometimes felt, or craving an interruption in the sea of asphalt and iron, a silence in the tide of chatter, she couldn’t imagine giving it up. Sometimes she joked to her mother—raised, as she herself had been, in Columbus, Ohio, and now a resident of Florida—that they’d have to carry her out feet first. There was no place like New York. And Australia, in comparison, was, well, Oz.

This last supper in Sydney was a purely social event. Where the Leveretts lived seemed like an area in which one or two ungentrified Aboriginal people might still linger, gray-haired and bleary, outside the pub at the end of the road: people who, pint in hand, hadn’t accepted the government’s apology and moved on. Or perhaps not, perhaps Danielle was merely imagining the area, its residents, as they had once been: for a second glance at the BMWs and Audis lining the curb suggested that the new Sydney (like the new New York) had already, and eagerly, edged its way in.

Moira was friendly with Lucy Leverett, who owned a small but influential gallery down at The Rocks that specialized in Aboriginal art. Her husband, Roger, was a nove...