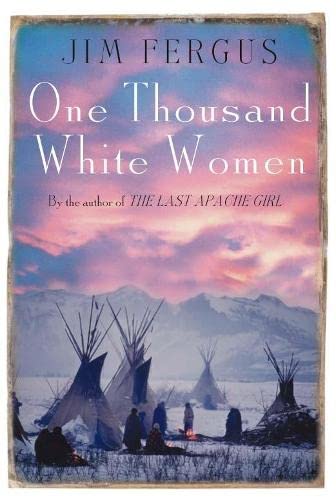 May Dodd, born to wealth in Chicago in 1850, left home in her teens and through a family disgrace is imprisoned in a monstrous lunatic asylum.

In 1875 Little Wolf, chief of the Cheyenne nation, comes to Washington to seal a treaty with President Ulysses S. Grant and suggests that peace between Whites and Cheyenne could be established if the Cheyenne were given white women as wives, and that the tribe would agree to raise the children from such unions. Grant secretly recruits 1,000 women from jails, penitentiaries, debtors' prisons, and mental institutions offering full pardons or unconditional release.

May, who jumps at the chance, embarks upon the adventure of her lifetime, along with a colourful assembly of pioneer women. She keeps the fictional journal we read, marries Little Wolf, lives in a crowded tipi with his two other wives and their children and lives the life of a Cheyenne squaw.

'Jim Fergus so skillfully envelops us in the heart and mind of his main character, May Dodd, that we weep when she mourns, we shake our fist at anyone who tries to sway her course, and our hearts pound when she is in danger'--"Colorado Springs Gazett"e

WINNER OF THE MOUNTAINS AND PLAINS BOOKSELLERS AWARD

"Jim Fergus's One Thousand White Women is a splendid, fresh, and engaging novel. Strikingly original." --Jim Harrison, author of Legends of the Fall

"A most impressive novel that melds the physical world to the spiritual. One Thousand White Women is engaging, entertaining, well-written, and well-told. It will be widely read for a long time, as will the rest of Jim Fergus's work." --Rick Bass, author of Where the Sea Used to Be

"Jim Fergus knows his country in a way that's evocative of Dee Brown and all the other great writers of the American West and its native peoples. But One Thousand White Women is more than a chronicle of the Old West. It's a superb tale of sorrow, suspense, exultation, and triumph that leaves the reader waiting to turn the page and wonderfully wrung out at the end." --Winston Groom, author of Forrest Gump

"The best writing transports readers to another time and place, so that when they reluctantly close the book, they are astonished to find themselves returned to their everyday lives. One Thousand White Women is such a book. Jim Fergus so skillfully envelopes us in the heart and mind of the main character, May Dodd, that we weep when she mourns, we shake our fist at anyone who tries to sway her course, and our hearts pound when she is in danger." --Colorado Springs Gazette

A Selection of the Literary Guild and Doubleday Book Club

" I leave this record for my dear children, in the event that they never see their loving mother again and so that they might one day know the truth of my unjust incarceration, my escape from Hell, and into whatever is to come in these pages..." from the journals of May Dodd

Based on an actual historical event but told through fictional diaries, this is the story of a remarkable woman who travels west in 1975 and marries the chief of the Cheyenne Nation.

One Thousand White Women begins with May Dodd's journey west, into the unknown. Yet the unknown is a far better fate than the life she left behind: committed to an insane asylum by her blueblood family for the crime of loving a man beneath her station, May finds that her only hope of freedom is to participate in a secret government program whereby women from the "civilized" world become the brides of Cheyenne warriors. What follows is the story of May's breathtaking adventures: her brief, passionate romance with the gallant young army captain John Bourke; her marriage to the great chief Little Wolf; and her conflict of being caught between two worlds, loving two men, living two lives.

So vividly has Jim Fergus depicted the American West that May Dodd's journals are like a capsule in time.