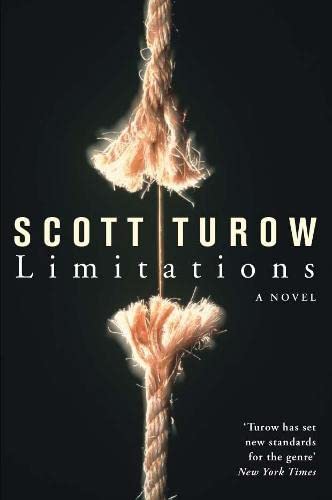 Life would seem to have gone well for George Mason. His days as a criminal defense lawyer are long behind him. At fifty-nine, he has sat as a judge on the Court of Appeals in Kindle County for nearly a decade. Yet, when a disturbing rape case is brought before him, the judge begins to question the very nature of the law and his role within it. What is troubling George Mason so deeply? Is it his wife's recent diagnosis? Or the strange and threatening e-mails he has started to receive? And what is it about this horrific case of sexual assault, now on trial in his courtroom, that has led him to question his fitness to judge?

In Limitations, Scott Turow, the master of the legal thriller, returns to Kindle County with a page-turning entertainment that asks the biggest questions of all. Ingeniously, and with great economy of style, Turow probes the limitations not only of the law but of human understanding itself.

"Scott Turow not only knows what his readers want, he delivers just about perfectly. . . . Turow is the closest we have to a Balzac of the fin de siècle professional class."--Chicago Tribune

"Turow has set new standards for the genre, most notably in the depth and subtlety of his characterizations. . . . The kind of reading pleasure that only the best novelists--genre or otherwise--can provide."--The New York Times

"Of all the lawyer-storytellers who have clambered onto the bestseller lists in recent years, Scott Turow is the champ. Not only are his plots absorbing and his characters persuasive, but his sentences flow with an artful cadence."--Dennis Drabelle, The Washington Post Book World

"Turow brings a literary sensibility to a grit-and-gravel genre: if he calls to mind any comparison, it's to John le Carré. His novels are shaped by [a] studied bleakness, an introspect's embrace of the gray-zone ambiguities of modern life."--Gail Caldwell, Boston Sunday Globe

"Turow is well established as one of the greater writers of modern legal thrillers. . . . Turow's prose is beautiful and his observations, particularly the perceptions of small-scale human vulnerabilities, can take your breath away."--The Times (London)

"One begins with admiration for Turow's skillful evocation of the thrill of detection; one finishes fascinated by his deft probing of the mysteries of character and family. Like John le Carré in the realm of spy novels and P. D. James in that of mysteries, Scott Turow has the goods to transcend the limitations of the genre."--Dan Cryer, Newsday

Scott Turow is the world-famous author of seven bestselling novels about the law, from Presumed Innocent to Ordinary Heroes, and of the nonfiction works One L and Ultimate Punishment. He lives with his family outside Chicago, where he is a partner in the law firm of Sonnenschein Nath & Rosenthal.