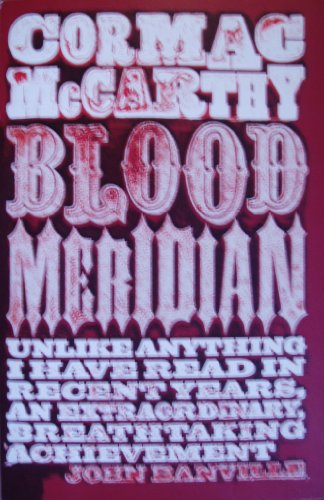 Blood Meridian is an epic novel of the violence and depravity that attended America's westward expansion, brilliantly subverting the conventions of the Western novel and the mythology of the Wild West. Based on historical events that took place on the Texas--Mexico border in the 1850s, it traces the fortunes of the Kid, a fourteen-year-old Tennesseean who stumbles into a nightmarish world where Indians are being murdered and the market for their scalps is thriving. 'Cormac McCarthy's violent lyric masterpiece, Blood Meridian acquires an amoral, apocalyptic dimension through the Miltonic grandeur of the language ...It is a barbarously poetic odyssey through a hell without purpose' Irish Times 'McCarthy's achievement is to establish a new mythology which is as potent and vivid as that of the movies, yet one which has absolutely the opposite effect ...He is a great writer' Independent 'A bloody and starkly beautiful tale' Stephen Amidon, Sunday Times

"The men as they rode turned black in the sun from the blood on their clothes and their faces and then paled slowly in the rising dust until they assumed once more the color of the land through which they passed." If what we call "horror" can be seen as including any literature that has dark, horrific subject matter, then Blood Meridian is, in this reviewer's estimation, the best horror novel ever written. It's a perverse, picaresque Western about bounty hunters for Indian scalps near the Texas-Mexico border in the 1850s--a ragged caravan of indiscriminate killers led by an unforgettable human monster called "The Judge." Imagine the imagery of Sam Peckinpah and Heironymus Bosch as written by William Faulkner, and you'll have just an inkling of this novel's power. From the opening scenes about a 14-year-old Tennessee boy who joins the band of hunters to the extraordinary, mythic ending, this is an American classic about extreme violence.

"The fulfilled renown of Moby-Dick and of As I Lay Dying is augmented by Blood Meridian, since Cormac McCarthy is the worthy disciple both of Melville and Faulkner," writes esteemed literary scholar Harold Bloom in his Introduction to the Modern Library edition. "I venture that no other living American novelist, not even Pynchon, has given us a book as strong and memorable."
Cormac McCarthy's masterwork, Blood Meridian, chronicles the brutal world of the Texas-Mexico borderlands in the mid-nineteenth century. Its wounded hero, the teenage Kid, must confront the extraordinary violence of the Glanton gang, a murderous cadre on an official mission to scalp Indians and sell those scalps. Loosely based on fact, the novel represents a genius vision of the historical West, one so fiercely realized that since its initial publication in 1985 the canon of American literature has welcomed Blood Meridian to its shelf.
"A classic American novel of regeneration through violence," declares Michael Herr. "McCarthy can only be compared to our greatest writers."