Items related to International Relations Between the Two World Wars 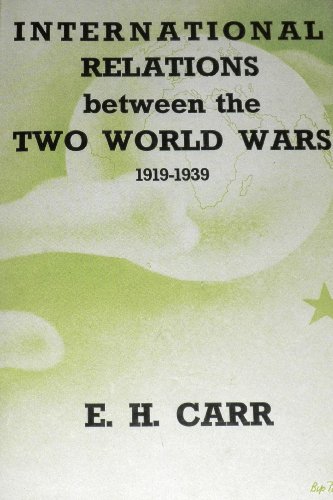 'A very excellent book ...A masterpiece of balanced exposition.' Sir Harold Nicolson, Daily Telegraph 'May well come to be regarded as the standard short history of world affairs ...The story is careful, balanced, adequate and no more trustworthy aid to an understanding of present foreign politics could be advised.' Times Literary Supplement

E.H. CARR who died in 1982 at the age of ninety was a Fellow of Trinity College, Cambridge, UK, and an Honorary Fellow of Balliol College, Oxford, UK. His books include International Relations between the Two World Wars 1919-1939, The Twenty Years' Crisis 1919-1939, Nationalism and After, The New Society, What is History?, 1917: Before and After, Michael Bakunin, The Russian Revolution From Lenin to Stalin 1917-1929, the fourteen volume History of Soviet Russia and The Twilight of the Comintern 1930-1935.

Buy Used
Condition: Good
DJ has yellowed, faded, and is... Learn more about this copy