Items related to The Industrialisation of Soviet Russia Volume 4: Crisis...

The Industrialisation of Soviet Russia Volume 4: Crisis and Progress in the Soviet Economy, 1931-1933 (Vol 4) 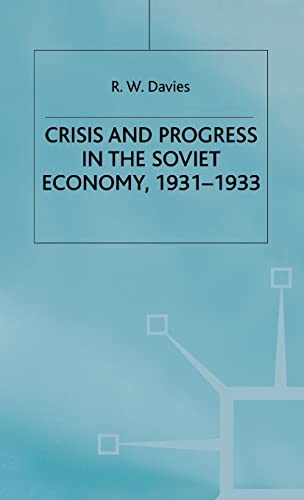 The profound economic crisis of 1931-33 undermined the process of industrialisation and the stability of the regime. In spite of feverish efforts to achieve the over ambitious first five-year plan, the great industrial projects lagged far behind schedule. These were years of inflation, economic disorder and of terrible famine in 1933. In response to the crisis, policies and systems changed significantly. Greater realism prevailed: more moderate plans, reduced investment, strict monetary controls, and more emphasis on economic incentives and the role of the market. The reforms failed to prevent the terrible famine of 1933, in which millions of peasants died. But the last months of 1933 saw the first signs of an industrial boom, the outcome of the huge investments of previous years. Using the previously secret archives of the Politburo and the Council of People's Commissars, the author shows how during these formative years the economic system acquired the shape which it retained until the collapse of the Soviet Union in 1991.

R. W. DAVIES is Emeritus Professor of Soviet Economic Studies in the Centre for Russian and East European Studies, University of Birmingham, of which he was previously Director. IN the course of his research he has paid many visits to Russia to study in Moscow and St Petersburg libraries and in the state and former party archives. His previous publications include The Development of the Soviet Budgetary System; Soviet History in the Gorbachev Revolution; From Tsarism to the New Economic Policy (editor); The Socialist Offensive: The Collectivisation of Soviet Agriculture, 1929-1930; The Soviet Collective Farm, 1929-1930; and The Soviet Economy in Turmoil, 1929-1930. He collaborated with E. H. Carr on Volumes 9 and 10 of A History of Soviet Russia.

Buy Used
Condition: Good
Volume 4. This is an ex-library... Learn more about this copy

Book Description Palgrave Schol, Print UK, 1996. Condition: Good. Volume 4. This is an ex-library book and may have the usual library/used-book markings inside.This book has hardback covers. In good all round condition. Seller Inventory # 7414565

Shipping: US$ 11.34
From United Kingdom to U.S.A.
Destination, rates & speeds