Items related to The New Grove Dictionary of Jazz

The New Grove Dictionary of Jazz 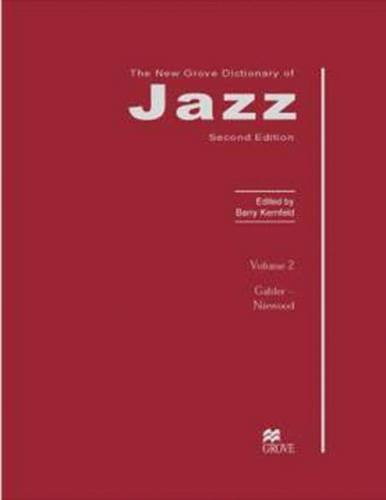 Another title updated in the "New Grove" series in 2001. In 3 volumes and with 7750 articles, "The New Grove Dictionary of Jazz", second edition is a resource for any serious jazz enthusiast or scholar. Featuring 2750 new entries and 1500 new biographies of musicians who came to prominence in the 1980s and 1990s, this new edition draws on the explosion of jazz research over the past dozen years. In addition, Barry Kernfield and his team have completely revised and updated all entries and have made tens of thousands of corrections throughout. New features include unprecedented coverage of previously underrepresented areas in world jazz, such as Caribbean, South African and Japanese musicians, extended lists of venues world-wide, a selected films and videos section, and the inclusion of URLs in the bibliographies.

Since gaining a Ph.D. in musicology at Cornell University in 1981, Barry Kernfeld has made a career of writing about jazz. A native of San Francisco, he was the first musicologist to win a grant-in-aid from the Martha Baird Rockerfeller Fund for Music (1980-81) for a topic in American music: a study of improvisation in Miles Davis's sextet (Ph.D., Cornell University, 1981). In addition to serving as editor of Grove Jazz, he has written What to Listen for in Jazz (Yale University Press), and for many years he has been playing saxophone in jazz groups in cafes in State College, Pennsylvania, where he lives.

*Starred Review* The second edition of The New Grove Dictionary of Jazz is finally here. Originally published in 1988 by Grove as a two-volume set (and reprinted in 1994 by St. Martin's Press in a more economical single volume), this revision encompasses three volumes. Although some reviewers quibbled over the exclusion of their pet journeyman jazz musicians in the first edition, everyone recognized the publication as the reigning authority in the world of jazz scholarship. With the new edition, the work supersedes itself as a landmark. Included are more than 2,700 new entries (1,500 of them biographical) and revisions to most preexisting entries.

The signed entries, written by jazz scholars worldwide, vary in length from a paragraph to several pages. The organization and scope are the same as in the previous edition: entries are arranged alphabetically and cover individual musicians, bands, concepts, styles, terms, instruments, record labels or companies, and institutions. Each entry ends with chronological lists of selected recordings (where applicable), a bibliography of selected books and articles, and, for the first time, Internet sites. New to this edition are lists of selected jazz films or videos in which artist(s) can be seen either performing or being interviewed. In the back of volume 3 there is a cumulative bibliography, "more than twice the size it was previously," listing reference and general books, discographies, and periodicals. A new calendar of jazz births and deaths is also appended. There is still no index, but there are cross-references throughout. A small number of black-and-white photographs has been added.

The New Grove Dictionary of Jazz is now the most up-to-date source for information on contemporary jazz musicians, outshining its closest competitor, The Oxford Companion to Jazz (Oxford, 2000). The latter only mentions selected contemporary musicians in its topical survey essays. Although the Oxford book offers surprisingly broad coverage of jazz outside of the U.S., New Grove offers expanded coverage of other countries and regions, particularly Japan, South Africa, and the Caribbean. There are updated lists of the major jazz festivals and jazz venues worldwide (with their own internal indexes) and an updated section on worldwide library and archive collections related to jazz. Newly added topics include Dance, Poetry, and Women, and styles resulting in the intersection of jazz with other genres, such as Acid jazz and Smooth jazz. A new section, "Cultural Meanings of Jazz in Film," was added to Films. The new biographies are mostly of musicians who have become prominent during the 1980s and 1990s, along with a few, such as Peggy Lee, excluded from the last edition. Some of the new musician entries include drummer Brian Blade, violinist Regina Carter, free jazz sax players Paul Dunmall and Jemeel Moondoc, eclectic band leader Ken Vandermark, and pianist Kenny Werner, to name just a few. Readers will be hard-pressed to think of excluded artists this time around.

The revised edition of The New Grove Dictionary of Jazz reaches new heights in jazz scholarship. The price tag is steep, but this set is essential for libraries with patrons studying jazz. Recommended for all libraries with serious music collections and jazz enthusiasts. RBB
Copyright © American Library Association. All rights reserved

1. The New Grove Dictionary of Jazz

Book Description Condition: Good. This is an ex-library book and may have the usual library/used-book markings inside.This book has hardback covers. In good all round condition. No dust jacket. Please note the Image in this listing is a stock photo and may not match the covers of the actual item,8150grams, ISBN:033369189X. Seller Inventory # 8424765

Shipping: US$ 12.26
From United Kingdom to U.S.A.
Destination, rates & speeds

2. The New Grove Dictionary of Jazz

Book Description Condition: Good. Volume 3 Nightclubs-Zwingenberger. Your purchase helps support Sri Lankan Children's Charity 'The Rainbow Centre'. Ex-library, so some stamps and wear, but in good overall condition. Our donations to The Rainbow Centre have helped provide an education and a safe haven to hundreds of children who live in appalling conditions. Seller Inventory # Z1-F-049-00011

Shipping: US$ 15.01
From United Kingdom to U.S.A.
Destination, rates & speeds

3. The New Grove Dictionary of Jazz

Book Description Hardcover. Condition: Acceptable. May have some shelf-wear due to normal use. This is a former library book with stickers, inserts and markings. Seller Inventory # 0KVOG2001COB