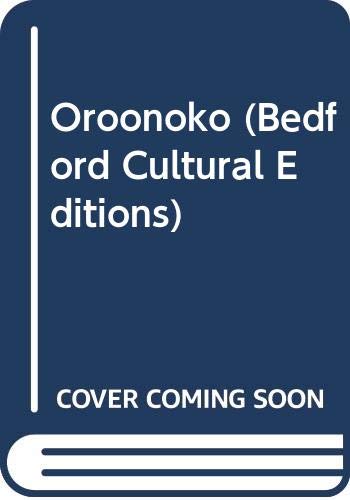 "Aphra Behn's Oroonoko, the story of an African prince's enslavement by British colonists and his journey from West Africa to the Caribbean, is the first literary work in English to portray the global interactions of that interlocking structure that came to be known as "the triangular trade." This edition features a generous selection of thematically organized historical materials that illuminate the three corners of the Atlantic triangle: West Africa, the Caribbean, and Europe. Excerpts from contemporary literary works by Ben Jonson, John Dryden, Richard Steele, and Daniel Defoe enrich our understanding of the literary contexts for Behn's portrayal of "blackness" in Oroonoko, and selections from later dramatizations of Oroonoko demonstrate the evolution of British attitudes toward racial difference in the century following the publication of Behn's work."--BOOK JACKET.

Aphra Behn flourished in the cosmopolitan world of the London playhouse and the court. It was she, Virginia Woolf wrote, "who earned [women] the right to speak their minds."

Joanna Lipking is Lecturer in English at Northwestern University, where she has taught since 1979. A Columbia Ph.D., she writes on women’s emergence in print culture. Her articles and reviews on Aphra Behn and other early women writers appear in Studies in the Eighteenth Century, The Eighteenth Century: A Current Bibliography, and the recent Cambridge University Press collection, Aphra Behn Studies.

Shipping: US$ 5.66
From United Kingdom to U.S.A.
Destination, rates & speeds

Book Description Palgrave Macmillan, 1999. Paperback. Condition: Very Good. The book has been read, but is in excellent condition. Pages are intact and not marred by notes or highlighting. The spine remains undamaged. Seller Inventory # GOR002672169

Shipping: US$ 11.25
From United Kingdom to U.S.A.
Destination, rates & speeds

Book Description Palgrave Macmillan, 1999. Paperback. Condition: GOOD. Spine creases, wear to binding and pages from reading. May contain limited notes, underlining or highlighting that does affect the text. Possible ex library copy, will have the markings and stickers associated from the library. Accessories such as CD, codes, toys, may not be included. Seller Inventory # 3247143998