Items related to The Making and Breaking of the Soviet System: An Interpretat...

Read, Christopher The Making and Breaking of the Soviet System: An Interpretation (European History in Perspective)

The Making and Breaking of the Soviet System: An Interpretation (European History in Perspective) 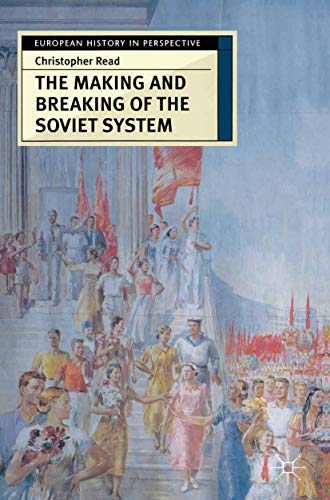 The consequences of the Russian Revolution of 1917 have been among the most dominant shaping forces of the twentieth century, eventually dividing almost the entire globe into a battleground between capitalism and communism. The reputations of the main leaders of Russia/the Soviet Union - Lenin, Stalin, Khrushchev, Brezhnev, Gorbachev and Yeltsin - have soared and plummeted. Great achievements such as victory over Nazi Germany; putting the first satellite and human in space; building a massive industrial base and advancing the living and educational standards of the population have been undermined by political repression and incalculable human cost.

In a cool, non-polemical manner, the author shows how the contradictory parts of the Soviet experience are linked. Using post-Soviet materials and perspectives he examines the reasons for the successes and failures of the Soviet system. In particular, the book argues that the underlying reasons for the system's collapse can be found in the contradictions of the revolution which gave birth to it. The consequences are traced through the Stalin Revolution, the Great Terror, the Second World War, the Cold War, the Khrushchev and Brezhnev years down to Gorbachev's doomed attempt to transform the Soviet system. Particular attention is given to the divergence between the aspirations of the leadership and the social evolution of the ordinary Russian people. The study concludes with a survey of the post-Soviet scene from Yeltsin to Putin. The result is a volume indispensible to anyone who needs a readily comprehensible guide to the Russia that lies beyond the stereotypes.

CHRISTOPHER READ is Reader in History at Warwick University.

1. Making and Breaking of the Soviet System : An Interpretation

Book Description Condition: Good. Former Library book. Shows some signs of wear, and may have some markings on the inside. Seller Inventory # 15251113-6

2. The Making and Breaking of the Soviet System: An Interpretation

Book Description Condition: Poor. This is an ex-library book and may have the usual library/used-book markings inside.This book has hardback covers. In poor condition, suitable as a reading copy. No dust jacket. Please note the Image in this listing is a stock photo and may not match the covers of the actual item,550grams, ISBN:9780333731529. Seller Inventory # 8312664

Shipping: US$ 12.00
From United Kingdom to U.S.A.
Destination, rates & speeds