Items related to Elections in Britain: A Voter's Guide

Elections in Britain: A Voter's Guide 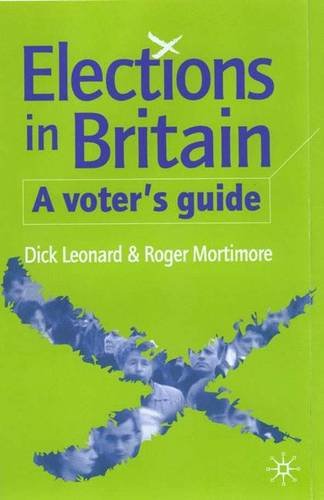 Big new changes in the British electoral system—devolved assemblies for Scotland, Wales and Northern Ireland, proportional representation for the European parliament and the direct election of London's Mayo—have all been introduced since the last general election in 1997, and others may be on the way. They are described and discussed by Dick Leonard, a leading political journalist and former MP, and Roger Mortimore, a senior opinion pollster, in this completely revised and updated edition of the standard work on British elections.

Dick Leonard, a leading political journalist, is currently European Community Correspondent for The Observer and Senior Advisor to the Centre for European Policy Studies.

Roger Mortimore has worked for MORI since 1993 as Political Analyst and Senior Political Assistant to the Chairman, Robert M. Worcester.

'...first sighting of Dick Leonard's Elections in Britain - A Voter's Guide is a sure-fire sign that the UK general election season has finally arrived.' - John Palmer, The Bulletin 'the nuts and bolts of the general election' - Gillian Peele, Times Educational Supplement 'Describes in useful detail how the British electoral system works.' - The Economist 'indispensable reading for all ...a host of facts, figures and anecdotes which turn the sometimes dry and dusty material of the psephologist into fascinating reading...' - John Palmer, The Bulletin

2. Elections in Britain: A Voter's Guide