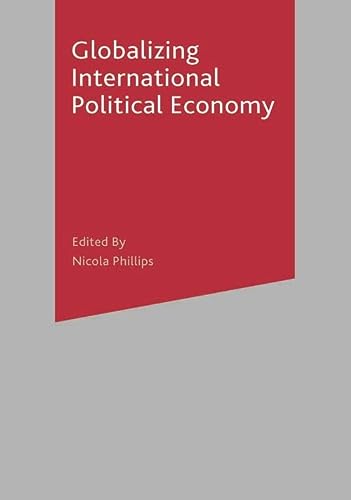 Despite its claims to global scope and relevance, International Political Economy as a field of study remains entrenched in a narrow set of theoretical, conceptual and empirical foundations derived from the experiences of the advanced industrialized democracies. Bringing together specially commissioned chapters by leading authorities in each key area of debate, Globalizing International Political Economy provides a systematic examination and critique of contemporary IPE, and puts forward a new agenda for a truly 'global' political economy.

"This excellent collection marks the emergence of a truly global international political economy transcending the divisions that have characterized the field since its beginning." - Craig N. Murphy, UNDP
"A powerful and illuminating critique of mainstream IPE which charts a path to a truly global analysis of contemporary capitalism. It makes a compelling case for putting issues of development in both industrialised and industrialising economies at the forefront of attention if we wish to understand the processes that make up globalization." - Andrew Gamble, University of Sheffield
"This original and provocative volume pushes forward the conventional boundaries of international political economy by asking new and important questions at the research frontiers where theoretical, empirical, and normative concerns intersect. Accessible and readable, it will be rewarding and thought provoking for students - and their teachers." - Louis W. Pauly, University of Toronto