Items related to The Suspended Middle 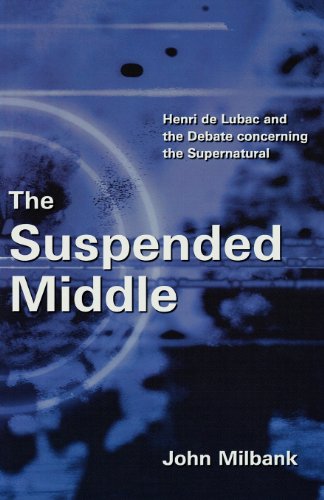 French Jesuit Henri de Lubac (1896-1991) was arguably the most revolutionary theologian of the twentieth century. He proposed that Western theology since the early modern period had lost sight of the key to integrating faith and reason -- the truth that all human beings are naturally oriented toward the supernatural. In this vital book John Milbank defends de Lubac’s claim and pushes it to a more radical extreme. The Suspended Middle shows how such a claim entails a ‘non-ontology’ suspended between rational philosophy and revealed theology, interweaving the two while denying them any pure autonomy from each other. As de Lubac’s writings on the supernatural implicitly dismantled the reigning Catholic (and perhaps Protestant) assumptions about Christian intellectual reflection, he met with opposition and even papal censure. Milbank’s sophisticated account of de Lubac delineates the French theologian’s relations with other proponents of the nouvelle theologie, such as Hans Urs von Balthasar, and clarifies the subtle but crucial divisions within recent Roman Catholic theology. The most substantial treatment in English of de Lubac’s as yet untranslated Surnaturel and the subsequent debate, Milbank’s Suspended Middle lays down an energetic challenge that every serious student of theology and Christian philosophy will want to engage.

John Milbank is Research Professor of Religion, Politics, and Ethics at the University of Nottingham, England, and Director of the Centre of Theology and Philosophy. His previous books include Theology and Social Theory, The Word Made Strange, Radical Orthodoxy (coeditor), and Being Reconciled.

1. The Suspended Middle: Henri De Lubac and the Debate Concerning the Supernatural

2. The Suspended Middle: Henri De Lubac and the Debate Concerning the Supernatural