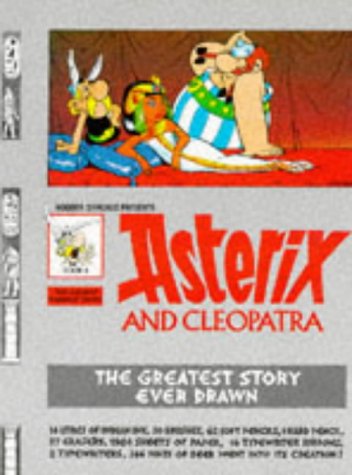 The series follows the exploits of a village of ancient Gauls as they resist Roman occupation. They do so by means of a magic potion, brewed by their druid, which gives the recipient superhuman strength. The protagonist, the titular character, Asterix, along with his friend Obelix have various adventures. In many cases, this leads them to travel to various countries around the world, though other books are set in and around their village. For much of the history of the series (Volumes 4 through 29), settings in Gaul and abroad alternated, with even-numbered volumes set abroad and odd-numbered volumes set in Gaul, mostly in the village.

The Asterix series is one of the most popular Franco-Belgian comics in the world, with the series being translated into over 100 languages, and it is popular in most European countries.

The success of the series has led to the adaptation of several books into 11 films; eight animated, and three with live actors. There have also been a number of games based on the characters, and a theme park near Paris, Parc Asterix, is themed around the series. To date, 325 million copies of 33 Asterix books have been sold around the world making co-creators Rene Goscinny and Albert Uderzo France's bestselling authors abroad.

Albert Uderzo has been illustrating Asterix for 37 years, and has written the most recent titles since Goscinny's death. He enjoys racing sports cars and owns a large number of Ferraris. He was the recipient of the Legion d'Honneur, France's highest honour, for services to the arts. Asterix is a best seller in 70 languages