Items related to THE DRAGONS OF EDEN: SPECULATIONS ON THE EVOLUTION...

CARL SAGAN THE DRAGONS OF EDEN: SPECULATIONS ON THE EVOLUTION OF HUMAN INTELLIGENCE

THE DRAGONS OF EDEN: SPECULATIONS ON THE EVOLUTION OF HUMAN INTELLIGENCE 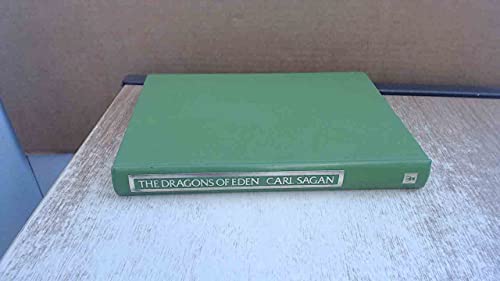 Dr. Carl Sagan takes us on a great reading adventure, offering his vivid and startling insight into the brain of man and beast, the origin of human intelligence, the function of our most haunting legends--and their amazing links to recent discoveries.
"A history of the human brain from the big bang, fifteen billion years ago, to the day before yesterday...It's a delight."
THE NEW YORK TIMES

Carl Sagan (1934-1996) was the Director of Cornell University’s Laboratory for Planetary Studies. He played a leading role in the American space program and was an adviser to NASA since its inception. He briefed the Apollo astronauts before their flights to the Moon, and was an experimenter on the Mariner, Viking, Voyager, and Galileo expeditions to the planets. He helped solve the mysteries of the high temperatures of Venus (answer: massive greenhouse effect), the seasonal changes on Mars (answer: windblown dust), and the reddish haze of Titan (answer: complex organic molecules). For his work, Dr. Sagan received the NASA medals for Exceptional Scientific Achievement, and the Pulitzer Prize for The Dragons of Eden. His 1980 television series Cosmos: A Personal Voyage won the Emmy and Peabody awards. The National Science Foundation declared that his “research transformed planetary science... his gifts to mankind were infinite.”

1. The Dragons of Eden: Speculations on the Evolution of Human Intelligence Sagan, Carl