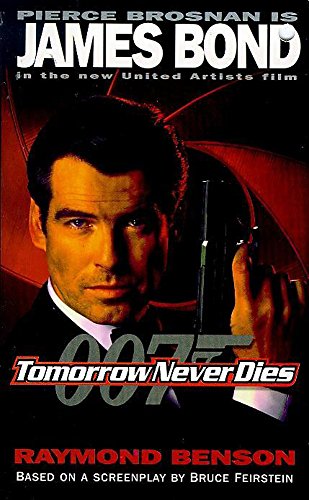 James Bond is up against a power-mad media mogul, in this story that ranges from the snowy Khyber Pass to a sea battle off the communist-controlled Hong Kong. And once more the stakes are high: only Bond can prevent the outcome a third world war.

Raymond Benson has now several James Bond novels, all Coronet paperbacks. He is also the author of The James Bond Bedside Companion, which was shortlisted for an Edgar Allan Poe Award for best biographical/critical work and is considered by 007 fans to be the definitive book on the world of James Bond. He is a director of the Ian Fleming Foundation and served as vice-president of the American James Bond 007 Fan Club for several years. Mr Benson is married, has one son and lives in the Chicago area.

Raymond Benson has expanded Bruce Feirstein's screenplay into an extremely enjoyable adventure novel, read with considerable expertise by John Kenneth. As in the better of the James Bond genre, this is not so much about plot and spying or any relation to a real world situation as it is about the 007 persona and how James is able to extract himself from impossible situations using his quick wits, athleticism, good looks, and general "coolness." The plot involves an unscrupulous media mogul, all the remaining national superpowers and pretenders, various male and female intelligence operatives who apparently are immune to AIDS or have learned to refrain from rational thought, and the expected military and mercenary contingents. Lots of action, sex, and violence here, but tastefully done with the good separated from the evil. A treat for Bond fans from teen to adult. Highly recommended.?Cliff Glaviano, Bowling Green State Univ. Libs., OH
Copyright 1998 Reed Business Information, Inc.