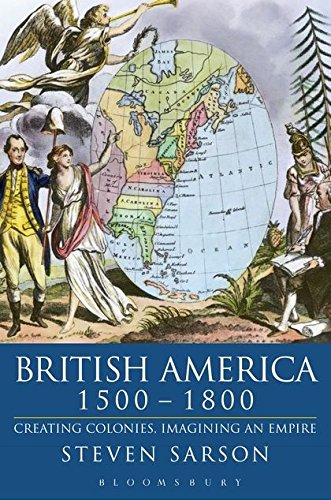 Sarson combines the histories of colonies and empires―usually distinct fields of inquiry―in a sweeping introduction to, and interpretation of, the British-American New World. He argues that while settlers created colonies, the early empire remained a largely imaginary construct. When Britain finally imposed a vision of empire from the 1760s, the settlers declared their independence, forcing Britain to consider imperialism as something much more than imaginary. The account examines the way in which the New World was invented and offers a convincing analysis of the loss of the first British Empire.

Steven Sarson is Lecturer in History at University of Wales, Swansea

“Essentially a textbook on early American history, covering the whole of settlement from the Maritime Provinces to the Caribbean and beyond. As such it is a good one. Sarson has compiled detailed narratives of the social and political development of every colony from the well-known stories of Virginians and New Englanders to far less familiar West Indian islands ... Especially intriguing is that Sarson extends not only the geographic but also the chronological boundaries of the field, managing most unusually to extend the story beyond 1776 even to the formation of a new government of the United States without losing sight of the larger context of British settlement and empire as imperial development extended into the northern reaches of North America and beyond.” ―Ned C. Landsman, William & Mary Quarterly

Shipping: US$ 20.97
From United Kingdom to U.S.A.
Destination, rates & speeds

Shipping: US$ 34.97
From United Kingdom to U.S.A.
Destination, rates & speeds