Items related to Manhattan Is My Beat

Deaver,Jeffery Manhattan Is My Beat

Manhattan Is My Beat 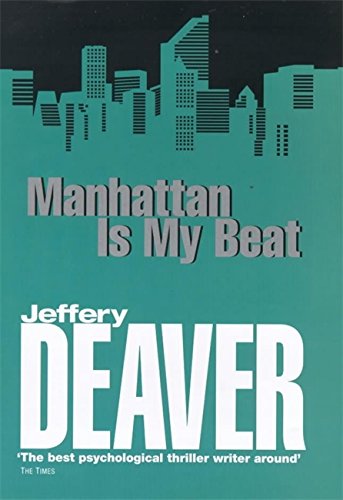 Five feet two inches of slick repartee, near-purple hair, and poetic imagination, twenty-year-old Rune hasn't been in Manhattan for very long. But she's crafty enough to have found a squatter's paradise in an empty TriBeca loft, and a video store job that feeds her passion for old movies. It's a passion she shares with her favorite customer, Mr. Kelly, a lonely old man who rents the same video over and over. The flick is a noir classic based on a real-life unsolved bank heist and a million missing dollars. It's called Manhattan Is My Beat. That's the tape Rune is picking up from Mr. Kelly's shabby apartment when she finds him shot to death. The police suspect a robbery gone wrong, but Rune is certain the key to solving the murder is hidden somewhere in the hazy, black-and-white frames of Mr. Kelly's beloved movie. But as Rune hits the mean streets of New York to find answers, she gets caught up in a dangerous adventure more chilling than anything Hollywood could dream up. As her story draws to its terrifying conclusion, Rune's final close-up may include the killer of a costar.

Jeffrey Deaver knows how to hook readers and keep them guessing with suspenseful, twisty plots. This early Deaver effort, originally published in 1988, will not disappoint fans dazzled by his subsequent, high-profile Lincoln Rhyme series (The Bone Collector, The Coffin Dancer, The Empty Chair.)

Manhattan Is My Beat takes its name from the (invented) 1947 film noir watched obsessively by murder victim Robert Kelly. Our heroine, Rune, (a punk with a heart of gold) works for Washington Square Video. On a routine pickup to retrieve Manhattan Is My Beat, she discovers Kelly just shot dead, the target of a professional hit. Rune and a woman jogger glimpse the presumed killer as he speeds off in a green car. While cops drag their heels in solving the mystery, Rune takes matters into her own hands, convinced that the motive for the murder is a missing suitcase stuffed with one million dollars--the subject, not coincidentally, of the film that Kelly and Rune both admired. An avid fan of fantasy novels and prone to see life through the prism of magic and quests, Rune takes up the challenge of finding the lost money and catching Kelly's killers. But the formidable hit team is intent upon destroying both possible witnesses to the murder, and their nimble crosses and double-crosses--some of which the reader sees, some of which are revealed at the end--make for fun reading.

Plotting moves briskly in this novel, except for a slowdown in the story--Rune's ambiguous romance with downtown poseur Richard has little to do with catching killers. The conclusion, while neatly wrapped, is marred by the sudden appearance of a crucial detail that Deaver produces like a fancy dish under the waiter's silver dome. But the gimmick to offset the conclusion's predictability feels like a cheat rather than a revelation. All in all, however, the novel is excellent mind candy, a thrilling romp lead by an agile, street-smart heroine. --Kathi Inman Berens

"Deaver writes with clarity, compassion, and intelligence, and with a decidedly human and contemporary slant."
--Publishers Weekly

"Deaver is a master of ticking-bomb suspense!"
--People

Death of a Blue Movie Star

"Truly an original."
--The Drood Review of Mystery

1. Manhattan Is My Beat (Rune Trilogy)

Book Description Hardback. Condition: Very Good. The book has been read, but is in excellent condition. Pages are intact and not marred by notes or highlighting. The spine remains undamaged. Seller Inventory # GOR002683398

2. Manhattan Is My Beat (Rune Trilogy)

Book Description Hardback. Condition: Good. The book has been read but remains in clean condition. All pages are intact and the cover is intact. Some minor wear to the spine. Seller Inventory # GOR002207158

3. Manhattan Is My Beat (Rune Trilogy)

4. Manhattan Is My Beat (Rune Trilogy)

Shipping: US$ 3.27
From United Kingdom to U.S.A.
Destination, rates & speeds

5. Manhattan is My Beat (Rune Trilogy)

Book Description Hodder and Stoughton, 2001. Hardcover. Condition: Used; Good. **SHIPPED FROM UK** We believe you will be completely satisfied with our quick and reliable service. All orders are dispatched as swiftly as possible! Buy with confidence!. Seller Inventory # 3709563

7. Manhattan Is My Beat

Book Description Hodder & Stoughton, 2001. Condition: Good. A+ Customer service! Satisfaction Guaranteed! Book is in Used-Good condition. Pages and cover are clean and intact. Used items may not include supplementary materials such as CDs or access codes. May show signs of minor shelf wear and contain limited notes and highlighting. Seller Inventory # 0340771054-2-4

8. Manhattan Is My Beat

9. Manhattan Is My Beat

Book Description Hodder & Stoughton. Hardcover. Condition: Good. Item is in good condition. Some moderate creases and wear. This item may not come with CDs or additional parts including access codes for textbooks. Might be an ex-library copy and contain writing/highlighting. Seller Inventory # DS-0340771054-3

10. Manhattan Is My Beat