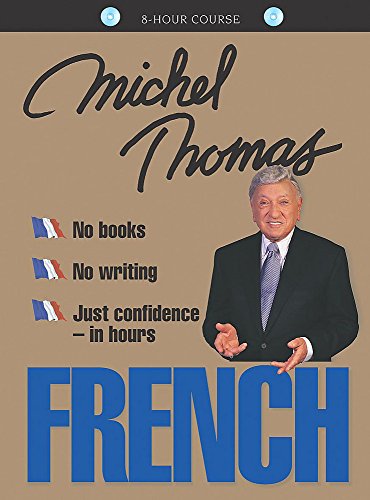 The best and easiest way to learn a new language. No reading! No writing! No studying! No memorising! Just listen, connect and speak - guaranteed success. This is the original best selling 8 hour French course from Michel Thomas, the Language Master. Michel Thomas's unique, compelling and effective teaching method has given millions of people the confidence to travel and communicate in the language of their choice. Now you can join the language revolution. No pens, No paper, No homework, No memorising. Just confidence and success. In only a matter of hours, he gives you a comprehensive grasp of the structure of the language, enabling you to communicate with confidence. The present, future, conditional and past tenses are covered, and you are taught to think about the ideas that you are trying to communicate, rather than to translate words slavishly. This pack contains Michel Thomas's 8 hour French course on 8 audio CD's.

No books. No writing. No drills. And nothing to memorize—ever! With his unique program, Michel Thomas has taught French, Italian, Spanish, and German to celebrities, corporate leaders, and school children—with immediate and amazing results. Now, the Language Teacher to the Stars invites you to join his class!

At home or in the car—in any place and at any time—you can learn from a world-class language teacher and become one of Michel's star students today!

"As the newly nominated—and subsequently appointed—U.S. ambassador to France in 1989 I had to brush up my French in a hurry. Michel Thomas performed a minor miracle with his innovative, no-pain learning system. Merci beaucoup, Michel!" -- W. J. P. Curley, former U.S. Ambassador to France and Ireland

"Michel Thomas has developed a truly revolutionary method of language instruction. All you have to do is follow his lead: no memorization, homework, or stress. I was amazed by my success using Michel's method." -- Warren Keegan, Professor of Business at Pace University in New York

Michel Thomas (New York, NY) is head of the Michel Thomas Language Centers and has been teaching languages for more than 50 years. He has taught his revolutionary language program all over the world.