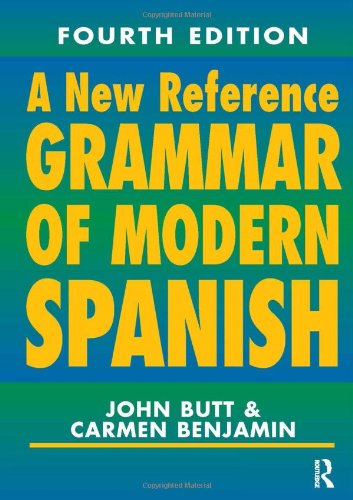 A New Reference Grammar of Modern Spanish is widely recognized as the standard English-language reference grammar of Spanish. It provides teachers and students of Spanish with a comprehensive, accessible and jargon-free guide to the forms and structures of the Spanish currently used in Spain and Latin America.
This new edition has been carefully revised and updated, and its explanations have been checked against the findings of the Royal Spanish Academy's Gramática descriptiva de la lengua española and other new works in the field. Many new Peninsular and Latin American examples have been included, the English text has been thoroughly revised and in many places expanded or clarified. A glossary of grammatical terms has also been included. As a result this new version should now be invaluable to an even wider readership ranging from intermediate to advanced students of Spanish.

"A New Reference Grammar of Modern Spanish is an essential reference tool for all interested in the Spanish language. The most extensive and accurate single-volume comprehensive source of information on contemporary Spanish language currently in existence in the English language."
--George DeMello, Professor of Hispanic Linguistics, University of Iowa

"Although I have several Spanish grammar reference texts in my collection, A New Reference Grammar of Modern Spanish is the one I reach for first. I find it to be not only comprehensive, but very user friendly."
--Patricia Seaver, Assistant Professor of Spanish, State University of New York (SUNY)

A New Reference Grammar of Modern Spanish is internationally known as the standard English-language reference grammar for the Spanish language. This bestselling resource has provided teachers and language learners with a comprehensive, accessible, and jargon-free guide to the forms and structures of Spanish as it is currently spoken and written in Spain and in across Latin America.

Each grammar concept is introduced by a thorough explanation, including helpful information on the level of usage (formal, familiar, colloquial, and popular) and regional use. Examples from contemporary sources--such as the Internet, magazines, and newspapers--illustrate each point and clarify the nuances of current usage.