Items related to The Battle of Corrin (Legends of Dune)

The Battle of Corrin (Legends of Dune) 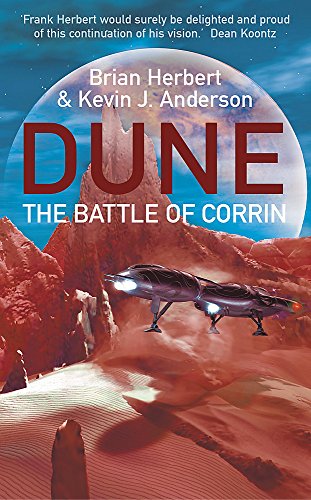 The universal computer mind Omnius has retreated to its last stronghold, where it plots a devastating new strategy that could undo the victories of the Butlerian Jihad. The surviving Titans are creating new lieutenants to do their will when at last they return to attack the human beings they once ruled. In the years of peace too many of mankind have forgotten that their machine enemies never sleep. But some have forgotten nothing - and learned from their triumphs. The brilliant military commander Vorian Atreides, son of a Titan, has the gift of long life from his terrifying father and knows the machines' minds better than any man alive. Norma Cenva, the genius inventor of humanity's best defences, dreams of new discoveries that will make man invincible. And on the windswept desert planet Arrakis, the power that can give them victory waits. The authors of Prelude to Dune have written the triumphant climax to the history of the Dune universe: the story most eagerly anticipated by its readers.

BRIAN HERBERT is a widely-published science fiction author in his own right. This is his first novel to call on his father's work: previously, he has created his own worlds, sometimes in collaboration. He has also written Dreamer of Dune, a comprehensive biography of his illustrious father. KEVIN J. ANDERSON is best known for his world-wide best-selling novels based on the universes of Star Wars and the X Files: he has been a Sunday Times number one bestseller. He is also the author of several more critically-acclaimed original novels. An expert on the US space programme, he worked at the Lawrence Livermore National Laboratory for ten years.

Machinery does not destroy. It creates, provided always that the controlling hand is strong enough to dominate it.

---Rivego, a muralist of Old Earth

Erasmus found the pecking order among the dying and hopeless humans fascinating, even amusing. Their reaction was all part of the experimental process, and he considered the results to be very worthwhile.

The robot strolled through the corridors of his meticulously organized laboratory facility on Corrin, swirling his plush crimson robe. The garment itself was an affectation he had developed in order to give himself a more lordly appearance. Alas, the victims in their sealed cells paid little heed to his finery, preoccupied instead with their suffering. Nothing could be done about that, since distractible humans had such difficulty focusing on matters that did not directly affect them.

Decades ago, squads of efficient construction robots had built this high-domed facility according to his exact specifications. The numerous well-equipped chambers---each one completely isolated and sterile---contained everything Erasmus required for his experiments.

As he continued his regular inspection rounds, the independent robot passed the glaz windows of sealed chambers in which plague test subjects lay strapped to beds. Some specimens were already paranoid and delirious, displaying the symptoms of the retrovirus, while others were terrified for good and rational reasons.

By now, testing was nearly complete on the engineered disease. The effective direct mortality rate was forty-three percent---not at all perfect, but still the deadliest viral organism in recorded human history. It would serve the necessary purpose, and Omnius could not wait much longer. Something had to be done soon.

The humans’ holy crusade against thinking machines had dragged on for almost a full century, with much destruction and distraction. The constant fanatical attacks from the Army of the Jihad had wrought incalculable damage to the Synchronized empire, destroying robot warships as fast as the various evermind incarnations could rebuild them. The progress of Omnius had been inexcusably stalled. Finally, Omnius demanded a solution. Since direct military conflict had not proved sufficiently effective, alternatives were explored. Biological plagues, for instance.

According to simulations, a fast-moving epidemic could be a superior weapon, serving to eradicate human populations---including their military forces---while leaving infrastructures and resources intact for the victorious thinking machines. After the specially designed plague ran its course, Omnius could pick up the pieces and get the systems operating again.

Erasmus had some reservations about the tactic, fearing that a sufficiently terrible disease could wipe out every last human. While Omnius might be satisfied with total extinction, the autonomous robot had no desire for such a final solution. He remained quite interested in these creatures---especially Gilbertus Albans, whom he had raised as a surrogate son after removing him from the squalid slave pens. In a purely scientific sense, Erasmus needed to keep sufficient organic material for his laboratory and field studies of human nature.

They couldn’t all be killed. Just most of them.

But the creatures were remarkably resilient. He doubted that even the worst epidemic could completely wipe out the species. Humans had an intriguing ability to adapt to adversity and overcome it by unorthodox means. If only thinking machines could learn to do the same....

Drawing his exquisite robe tight, the platinum-skinned robot entered the central chamber of the facility, where his turncoat Tlulaxa captive had engineered the perfect RNA retrovirus. Thinking machines were efficient and dedicated, but it took a corrupted human imagination to channel Omnius’s wrath into a sufficiently destructive course of action. No robot or computer could have conceived such appalling death and destruction: That required the imagination of a vengeful human.

Rekur Van, a biological engineer and geneticist now reviled across the League of Nobles, squirmed in his life-support socket, unable to move more than his head because he had no arms or legs. A retention socket connected the geneticist’s body core to nutrient and waste tubes. Shortly after capturing him, Erasmus had seen to the removal of the man’s limbs, rendering him much more manageable. He was certainly not trustworthy, in sharp contrast with Gilbertus Albans.

The robot fashioned a cheery smile on his flowmetal face. “Good morning, Stump. We have much work to do today. Perhaps we will even finish our primary test runs.”

The Tlulaxa’s narrow face was even more pinched than usual; his dark, close-set eyes flitted about like those of a trapped animal. “It’s about time you got here. I’ve been awake for hours, just staring.”

“Then you have had plenty of time to develop remarkable new ideas. I look forward to hearing them.”

The captive grunted a coarse insult in response. Then: “How are you coming on the reptilian regrowth experiments? What progress?”

The robot leaned close and lifted a biological flap to look at the bare skin on one of Rekur Van’s scarred shoulders.

“Anything yet?” the Tlulaxa asked, anxiously. He bent his head at an odd angle, trying to see details of the stump of his arm.

Erasmus checked the biological flap on the other shoulder. “We might have something here. A definite growth bump on the skin.” Each test site contained different cellular catalysts injected into the skin in an effort to regenerate the severed limbs.

“Extrapolate from your data, robot. How long before my arms and legs grow back?”

“That is difficult to say. It could be several weeks, or possibly much longer.” The robot rubbed a metal finger over the bump on the skin. “Conversely, this growth could be something else entirely. It has a reddish coloration; perhaps it is nothing more than an infection.”

“I don’t feel any soreness.”

“Don’t be rude. This is supposed to be a collaborative effort.” Though the results did look promising, this work wasn’t the robot’s priority. He had something more important in mind.

Erasmus made a minor adjustment to an intravenous connection that smoothed away the discontent in the man’s narrow face. Undoubtedly, Rekur Van was undergoing one of his periodic mood swings. Erasmus would observe him closely and administer medication to keep him operating efficiently. Perhaps he could prevent the Tlulaxa from having one of his full-fledged tantrums today. Some mornings, anything could set him off. Other times, Erasmus purposely provoked him just to observe the result.

Controlling humans---even such a disgusting example---was a science and an art. This degraded captive was as much a “subject” as any of the humans in the blood-spattered slave pens and chambers. Even when the Tlulaxa was driven to the extreme, when he struggled to rip away his life-support systems using nothing more than his teeth, Erasmus could always get him working on the plagues again. Fortunately, the man despised League humans even more than he hated his machine masters.

Decades ago, during a great political upheaval in the League of Nobles, the dark secret of the Tlulaxa organ farms had been revealed to the horror and disgust of free humanity. On the League Worlds, public opinion had been inflamed against the genetic researchers, and outraged mobs had destro

The Battle of Corrin (Legends of Dune)

The Battle of Corrin (Legends of Dune) Herbert, Brian and Kevin J.Anderson