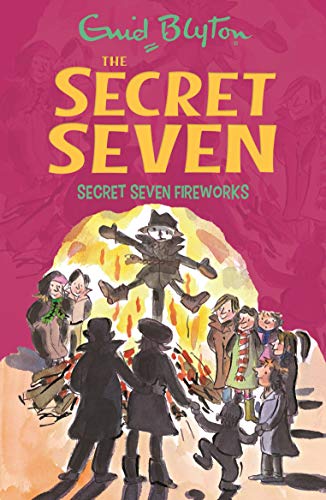 Secret seven fireworks: secret seven (11) is the 11th book in the secret seven series. The series is penned by enid blyton, an iconic author of children's books. While enid blyton passed away in 1968, she remains one of the most popular authors of children's books. She is credited with the creation of such series as famous five, secret seven, naughtiest girl, and malory tower and st. Clare's series. The secret seven gang is made up of 7 teenage kids, namely peter, janet, jack, barbara, pam, colin, and george. Peter is the leader of the gang, while janet is his sister. A group of amateur detectives always go trail hunting and solve mysteries. In secret seven fireworks, it comes to the knowledge of the gang that susie has made her own detective gang. Susie is jack's sister, and she often disrupts the gang's secret meetings. She is not liked by the gang at all, and they do everything possible to keep her away. After learning of susie's new 'detective gang, the secret seven are furious. Sh

Book Description Hachette Children's Group, 2004. Condition: Good. 1st Edition. Shows some signs of wear, and may have some markings on the inside. Seller Inventory # 9726414-75

Book Description Hachette Children's Group, 2004. Condition: Good. 1st Edition. Ships from the UK. Former Library book. Shows some signs of wear, and may have some markings on the inside. Seller Inventory # GRP94250765

Shipping: US$ 5.56
From United Kingdom to U.S.A.
Destination, rates & speeds

Book Description HODDER & STOUGHTON, 2011. Paperback. Condition: Very Good. The book has been read, but is in excellent condition. Pages are intact and not marred by notes or highlighting. The spine remains undamaged. Seller Inventory # GOR004984682

Shipping: US$ 7.63
From United Kingdom to U.S.A.
Destination, rates & speeds