Items related to The Killing (CHERUB, No. 4)

Muchamore, Robert The Killing (CHERUB, No. 4) 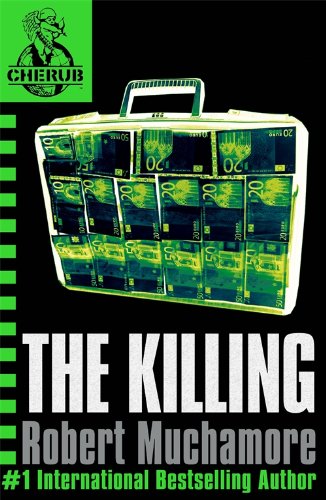 A junior MI5 from an exciting new author. CHERUB kids live in the real world. For official purposes, they do not exist. When a small-time crook suddenly has big money on his hands, it's only natural that the police wnat to know where it came from. James' latest CHERUB mission looks routine: make friends with the bad guy's children, infiltrate his home and dig up some leads for the cops to investigate. But the plot James begins to unravel isn't what anyone expected. And it seems like the only person who might know the truth is a reclusive eighteen-year-old boy. There's just one problem. The boy fell from a rooftop and died more than a year earlier.

Robert Muchamore was born in Islington in 1972 and spent thirteen years working as a private investigator. He loves Arsenal and watching people fall down holes. He hates swimming and getting chased by cows. He was inspired to start writing by his nephew's complaints about the lack of anything for him to read! His books are now bestsellers in many countries around the world. For more information, go to www.muchamore.com.

UNIFORM
For the past three years George Stein has worked as an economics teacher at the exclusive Trinity Day School near Cambridge. Recently, information has come to light suggesting that Stein may have links with the environmental terrorist group Help Earth. (Excerpt from CHERUB mission briefing for Callum Reilly and Shakeel “Shak” Dajani.)

It was a fine day and this part of Cambridge had the whiff of serious money. The immaculate lawns were coiffured by professional gardeners, and James drooled over the expensive lumps of German metal parked on the driveways. He was walking with Shakeel, and both boys felt self-conscious in the summer uniform of Trinity School. It consisted of a white shirt, a tie, gray trousers with orange piping, an orange and gray blazer, and matching felt cap.

“I’m telling you,” James moaned, “even if you sat down and tried really hard, I don’t think you could come up with a way to make this uniform look any dumber.”

“I dunno, James. Maybe we could have partridge feathers sticking out of the hats or something.”

“And these trousers were meant for Callum’s skinny butt. They’re killing my balls.”

Shak couldn’t help seeing the funny side of James’s discomfort. “You can’t blame Callum for pulling out of the mission at the last minute. It’s that stomach bug that’s going around campus.”

James nodded. “I had it last week. I was barely off the bog for two whole days.”

Shak looked at his watch for the millionth time. “We need to up the pace.”

“This isn’t some London comprehensive full up with scummy little Arsenal fans like you,” Shak explained. “Trinity is one of the top fee-paying schools in the country, and the pupils aren’t allowed to wander around the corridors whenever it suits them. Our arrival’s got to coincide with the changeover between third and fourth periods, when there’s hundreds of other kids moving around.”

Shak looked at his watch for the millionth and first time as they cut into a cobbled alleyway that was barely wide enough for a single car.

“I’m trying,” James said. “But I’m seriously gonna rip the arse out of these trousers if I’m not careful.”

Once they’d cut between two large houses, the alleyway opened out into a run-down park with knee-high grass and a set of tangled swings. To the boys’ left stood a chain-link fence topped with barbed wire, behind which lay the grounds of Trinity Day. The main gates were carefully monitored during school hours, so this was their only way in.

Shak wandered through the long grass next to the fence, placing his shoe carefully to avoid turds and litter, as he searched for an entry point made by an MI5 operative the previous night. He found the flap cut in the wire behind the trunk of a large tree. Shak lifted it, doffed his cap, and attempted a snooty accent. “After you, James, my good man.”

James fed his backpack and hat through the gap before sliding under. He stood with his back against the tree and brushed dirt off his uniform while Shak followed.

“All set?” James asked as he slung his backpack over his shoulder. It weighed a ton and the equipment inside clattered around.

James let out a little gasp as he leaned forward and picked the cap out of the grass. A claxon sounded inside the school building a couple of hundred meters away, indicating a lesson change.

The boys broke out from behind the tree and began jogging across a rugby pitch towards the school building. As they did, they noticed a groundskeeper striding purposefully towards them from the opposite end of the field.

Because James had been pulled onto the mission at the last minute to replace Callum, he’d only had time to skim through the mission briefing. He looked uneasily at Shak for guidance.

The groundskeeper intercepted the boys near a set of rugby posts. He was a fit looking fellow with thinning gray hair, dressed in workman’s boots and a grubby overall.

“Exactly what do you think you’re doing out here?” he demanded pompously.

“I was reading under the tree at lunchtime,” Shak explained, pointing backwards with his thumb. “I left my cap behind.”

“You know the rules of the school, don’t you?”

Shak and James both looked confused.

“Don’t try playing the fool with me, you know as well as I do. If you’re not attending a lesson, a match, or an official practice, you do not set foot on the games pitches because it causes unnecessary wear and tear.”

“Sorry,” James added. “But it’s not like the pitches are muddy or anything. We’re not really tearing them up.”

The groundskeeper took James’s comment as a threat to his authority. He swooped down and showered James with spit as he spoke. “I make the rules here, young man. You don’t decide when you can and can’t set foot on my pitches. Got that?”

“What’s your name and house?”

“Joseph Mail, King Henry House,” James lied, recalling one of the few elements of his background story he’d managed to remember from the mission briefing.

“Right,” the groundskeeper said, bouncing smugly on the balls of his feet. “I’ll be reporting both of you to your housemaster, and I expect your cheek will have earned you both a detention. Now, you’d better get yourselves to your next lesson.”

“Why’d you answer back?” Shak asked irritably as the boys walked towards the back entrance of the school.

“I know I shouldn’t have,” James said, raising his palms defensively. “But he was so full of himself.”

They passed through a set of double doors into the main school building, then up a short flight of steps and into the busy thoroughfare that ran the length of the ground floor. There was plenty of noise, but the Trinity boys walked purposefully, nodding politely to the teachers standing in the doorways as they entered their classrooms.

“What a bunch of geeks,” James whispered. “I bet these dudes don’t even fart.”

Shak explained the situation as they headed up the stairs to the second floor. “Every kid has to pass special exams and an interview to get into Trinity. There’s always a humungous waiting list, so they can afford to boot out anyone who doesn’t toe the line.”

By the time they reached the second floor, most kids had found their way to lessons and the classroom doors had been pulled shut. Shak pulled a lock gun from the pocket of his blazer as they passed by a couple of classroom doors. He stopped at the door of an office with a nameplate on it: Dr. George Stein BSc, PhD, Head of Economics and Politics.

Shak pushed the tip of the lock gun into the keyhole. James stood close by, blocking the view of a bunch of kids waiting outside a classroom fifteen meters away.

The lock had a simple single-lever mechanism, meaning Shak only had to give the lock gun a brief wiggle and pull on the trigger to open the door. The pair hurriedly stepped into the office and put the latch down so that nobody could burst in on them, even with a key.

“Stein should be teaching two floors up,” Shak said. “We’ve got until the next lesson change in thirty-six minutes; let’s get to work.”

Book Description Hachette Children's Group, United Kingdom, 2005. Paperback. Condition: New. Language: English. Brand new Book. The fourth title in the number one bestselling CHERUB series! A routine operation for James turns into a much more deadly mission .Leon is a small-time crook who's ridden his luck for three decades. When he starts splashing big money around, the cops are desperate to know where it came from. They call in CHERUB, a secret organisation with one essential advantage: even experienced criminals never suspect that children are spying on them. James' latest mission looks routine, but the plot he begins to unravel isn't what anyone expected. And the only person who might know the truth is a reclusive eighteen-year-old boy. There's just one problem. The boy fell to his death thirteen months earlier. Seller Inventory # HUK9780340894330

Book Description Hachette Children's Group, United Kingdom, 2005. Paperback. Condition: New. Language: English. Brand new Book. The fourth title in the number one bestselling CHERUB series! A routine operation for James turns into a much more deadly mission .Leon is a small-time crook who's ridden his luck for three decades. When he starts splashing big money around, the cops are desperate to know where it came from. They call in CHERUB, a secret organisation with one essential advantage: even experienced criminals never suspect that children are spying on them. James' latest mission looks routine, but the plot he begins to unravel isn't what anyone expected. And the only person who might know the truth is a reclusive eighteen-year-old boy. There's just one problem. The boy fell to his death thirteen months earlier. Seller Inventory # HUK9780340894330

Book Description Hodder Children's Books, 2005. Paperback. Condition: New. Paperback. The fourth title in the number one bestselling CHERUB series! A routine operation for James turns into a much more deadly mission .Leon is a small-time crook who's ridden his luck for th.Shipping may be from multiple locations in the US or from the UK, depending on stock availability. 336 pages. 0.230. Seller Inventory # 9780340894330