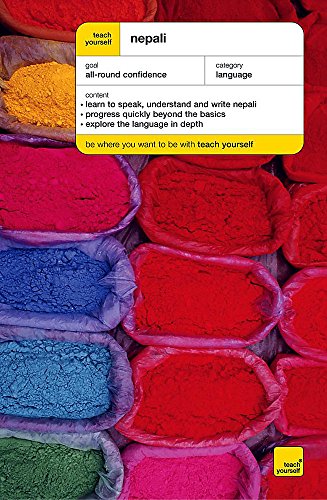 This book/CD pack is a complete course in understanding, speaking and writing Nepali, the lingua franca of the central and eastern Himalaya, and the national language of Nepal. If you are a beginner, or if your Nepali just needs brushing up, this course will progress quickly beyond the basics to a level where you can communicate with confidence. The course has proved effective as teaching material for both class tuition and individual study. The Nepali presented in the course is primarily colloquial and practical. The course is divided into 24 units, each of which is based on dialogues which exemplify and bring to life the new grammar introduced in that particular unit. Transliteration in the roman script is provided for the first four units and for all words in the English-Nepali glossary. The grammatical explanations are intended to be as accessible and non-technical as possible. The main grammatical structures of Nepali are all presented. There are plenty of exercises for you to practise every new point and a key at the back so that you can check your answers.The book (0 340 867078) is accompanied by 2 cassettes (0 340 867094) or 2 CDs (0 340 913851) containing approximately 2 hours of listening material. The audio can be purchased on its own or as packs with the book (book/cassette pack: 0 340 867086; book/CD pack: 0 340 913843).

Michael Hutt studied for a BA in South Asian Studies at the School of Oriental and African Studies (SOAS) in London from 1976 to 1980, and then for a PhD in Nepali, which was awarded in 1984. Since 1990 he has taught Nepali and Himalayan Studies at SOAS and has published a range of books and articles on Nepali language, literature, art and archirecture, politics and history. His most recent work deals with the problem faced by Nepali-speaking Bhutanese refugees. Abhi Subedi has an M.A.in literature and Ph.D. in literary theory. He did postgraduate language studies at Edinburgh University. He is currently Professor of English at Kirtipur, Tribhuvan University. He is a Nepali writer, critic, poet and playwright and has had over a dozen books published.

Book Description Teach Yourself, 2005. Paperback. Condition: Good. Minor surface scratches to the disc Good condition is defined as: a copy that has been read but remains in clean condition. All of the pages are intact and the cover is intact and the spine may show signs of wear. The book may have minor markings which are not specifically mentioned. Most items will be dispatched the same or the next working day. Seller Inventory # wbb0014603736

Shipping: US$ 11.70
From United Kingdom to U.S.A.
Destination, rates & speeds