Items related to The Bone Clocks 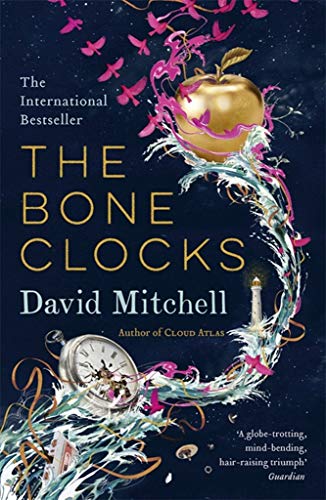 An Amazon Best Book of the Month, September 2014: Fans of David Mitchell (Cloud Atlas, Black Swan Green, The Thousand Autumns of Jacob De Zoet) have been salivating over the release of The Bone Clocks —and they have every reason to. This is a feast of a book—perhaps the author’s best to date—a saga that spans decades, characters, genres, and events from Mitchell's other novels. The structure is most similar to Cloud Atlas, with The Bone Clocks pivoting around a central character: Holly Sykes. Each chapter/novella is narrated from the perspective of an intersecting character, with settings ranging from England in the 80s to the apocalyptic future. Each story could stand alone as a work of genius, as they slowly build on Holly’s unwitting role in a war between two groups with psychic powers, culminating in a thrilling showdown reminiscent of the best of Stephen King. Taken together this is a hugely entertaining page-turner, an operatic fantasy, and an often heartbreaking meditation on mortality. It’s not to be missed. – Matt Kaye

David Mitchell is the award-winning and bestselling author of The Thousand Autumns of Jacob de Zoet, Black Swan Green, Cloud Atlas, Number9Dream, and Ghostwritten. Twice shortlisted for the Man Booker Prize, Mitchell was named one of the 100 most influential people in the world by Time in 2007. With KA Yoshida, Mitchell translated from the Japanese the internationally bestselling memoir The Reason I Jump. He lives in Ireland with his wife and two children.

Book Description Sceptre, 2015. Paperback. Condition: Used; Good. Dispatched, from the UK, within 48 hours of ordering. This book is in good condition but will show signs of previous ownership. Please expect some creasing to the spine and/or minor damage to the cover. Damaged cover. The cover of is slightly damaged for instance a torn or bent corner. Grubby book may have mild dirt or some staining, mostly on the edges of pages. Seller Inventory # CHL6562318

Book Description Hodder & Stoughton, United Kingdom, 2015. Paperback. Condition: Very Good. Run away, one drowsy summer's afternoon, with Holly Sykes: wayward teenager, broken-hearted rebel and unwitting pawn in a titanic, hidden conflict. Over six decades, the consequences of a moment's impulse unfold, drawing an ordinary woman into a world far beyond her imagining. And as life in the near future turns perilous, the pledge she made to a stranger may become the key to her family's survival . . . The book has been read, but is in excellent condition. Pages are intact and not marred by notes or highlighting. The spine remains undamaged. Seller Inventory # GOR007105052