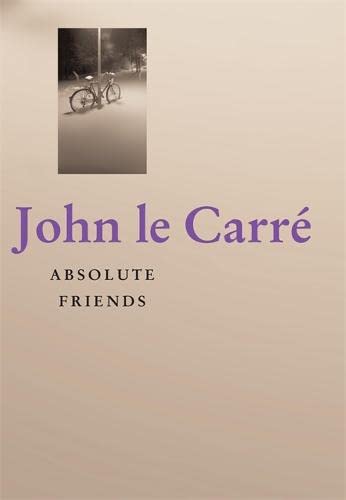 An absolutely triumphant bestseller—everywhere hailed as the masterpiece toward which John le Carré has been building since the fall of communism. This thrilling tale of loyalty, betrayal, and international espionage spans the lives of two friends from the riot-torn West Berlin of the 1960s to the grimy looking-glass of Cold War Europe to the present day of terrorism and uncertain new alliances—alliances that aren't always what they seem to be.

John le Carré was born in 1931. His third novel, The Spy Who Came in from the Cold, secured him a worldwide reputation, which was consolidated by the acclaim for his trilogy Tinker, Tailor, Soldier, Spy; The Honourable Schoolboy; and Smiley’s People. His recent novels include The Constant Gardener, Absolute Friends, The Mission Song, A Most Wanted Man, and Our Kind of Traitor. A Delicate Truth is his twenty-third novel.

English Teddy Mundy and German Sasha are the absolute friends of the title. Their intersecting lives and involvement in espionage create an uncommon structure for John le Carré's timely and provocative new novel. The first two-thirds of the flashback-laden plot focuses mostly on Mundy, his seedy life as cashiered double agent/current tour guide in a Bavarian castle and his past adventures with Sasha. The last third of the book concerns a scheme that the revolutionary Sasha ("I have the Lutheran curse. Conviction without action has no meaning.") presents to Mundy to undermine the American/British incursion in Iraq with the backing of a mysterious philanthropist. John Lee handles the many characters and accents well; he is at his best in pacing the book so that the listener enjoys complete clarity about the timeframe of the shifting events. Lee also excels in the dramatic final scenes. G.H. © AudioFile 2005, Portland, Maine-- Copyright © AudioFile, Portland, Maine