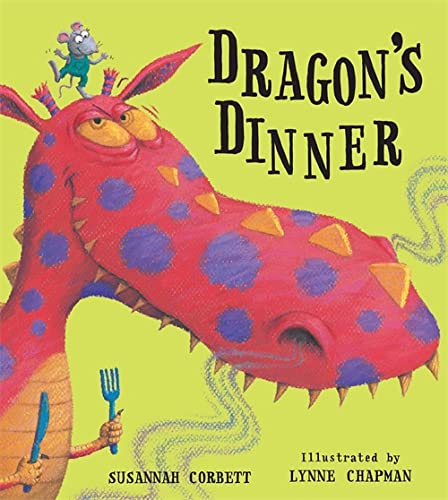 Deep in the woods in a cave inky black, a dragon fancies a tasty snack! As the chase begins for his food he tries to have lunch with a bear, eat a foxes' tail on toast, and make an owl a grand appetiser! But the dragon's dinner plans are scuppered when a teeny-tiny mouse with a little squeak manages to finally scare the beast away!

Susannah Corbett is an actress who has worked on TV, film and the West End. She has appeared in Peak Practise and Dalziel and Pascoe. Her most frightening experience was doing stand-up at The Comedy Store. Lynne Chapman has illustrated over 25 children's books in the last ten years. She works from her home, a Victorian house on the edge of the Peak District National Park in England where she lives with her husband. In her spare time, Lynne writes and performs poetry with her group The Electric Tomatoes. Find out more at www.lynnechapman.co.uk

Reviews of Class Two at the Zoo by Lynne Chapman: "A visit to the zoo turns suddenly perilous for a rambunctious class in this bouncy cautionary tale... Just the ticket for reading prior to a class trip." Kirkus Reviews "With animated illustrations, especially the snake's bulging belly as his 'dinner' wriggles inside him, there's a rising sense of suspense before the snake relinquishes his captives and slinks off to slighter another day..." Junior -- Various

Book Description Hardback. Condition: Fair. A readable copy of the book which may include some defects such as highlighting and notes. Cover and pages may be creased and show discolouration. Seller Inventory # GOR003543144

Book Description Hardback. Condition: Good. The book has been read but remains in clean condition. All pages are intact and the cover is intact. Some minor wear to the spine. Seller Inventory # GOR005476817

Book Description Hardback. Condition: Very Good. The book has been read, but is in excellent condition. Pages are intact and not marred by notes or highlighting. The spine remains undamaged. Seller Inventory # GOR006387067

Book Description Hodder Children's Books. Condition: Good. Sticker on cover. Wear and tear to cover. Ex-library, so some wear and barcode page may have been removed, but in good overall condition. Seller Inventory # Z1-B-012-00733

Shipping: US$ 7.81
From United Kingdom to U.S.A.
Destination, rates & speeds

Book Description Hodder Childrens Books, 2009. Hardcover. Condition: Used; Good. Ex Library Copy **SHIPPED FROM UK** We believe you will be completely satisfied with our quick and reliable service. All orders are dispatched as swiftly as possible! Buy with confidence!. Seller Inventory # 3535816