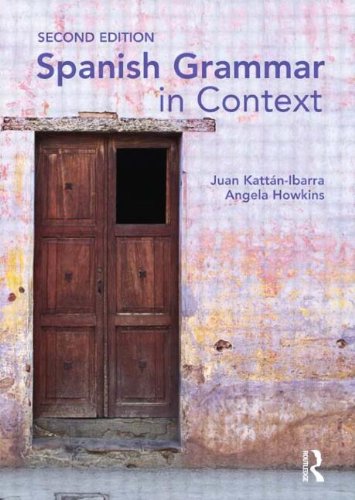 Spanish Grammar in Context uses authentic text to illustrate and explain the key areas of Spanish grammar, and then offers a range of exercises for students to test their understanding and to produce effective language of their own.
Aimed at intermediate and advanced learners, and with a key to the exercises provided, the book is suitable for independent and tutor-led study.
Sourced from contemporary literature, newspaper and magazine articles from both Spain and Latin America, the texts are up-to-date and topical, and together with the exercises which have been expanded for the second edition,
give students a comprehensive coverage of Spanish grammar

Learn to use Spanish grammar like a native speaker

The best way to bring the grammar of a language to life is by experiencing it in context, as it is actually used by native speakers and writers. Spanish Grammar in Context presents authentic texts from newspapers and magazines from across the Spanish-speaking world and uses them as the starting point for the illustration and explanation of key areas of Spanish grammar, particularly those that cause difficulties for English speakers.

Whether you are an intermediate or an advanced student of Spanish, you'll find Spanish Grammar in Context invaluable for individual or classroom learning.

Includes sources from around the Spanish-speaking world, such as