Items related to This Timeless Moment: A Personal View of Aldous Huxley

This Timeless Moment: A Personal View of Aldous Huxley 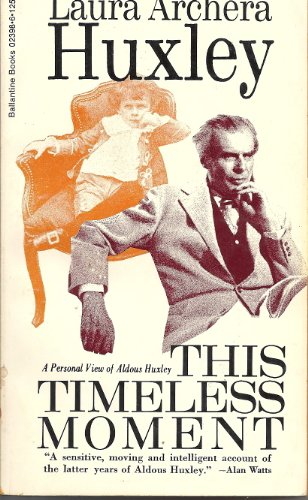 Long before "turn on, tune in, drop out" became the credo of the American counterculture, Aldous Huxley was using mescaline and LSD in controlled, carefully documented experiments. Accounts of those psychedelic experiences, along with his interest in Eastern mystical religions, accompany the moving story of Aldous Huxley's later years with his wife, Laura. Huxley's fascination with the spiritual world remained with him throughout his life and never wavered through his final illness in 1963. THIS TIMELESS MOMENT takes the reader into the lively mind of one of the most profound thinkers of any generation.

LAURA HUXLEY is a psychotherapist and the author of several books, including You Are Not the Target, Between Heaven and Earth, and The Child of Your Dreams. She lives in Los Angeles.

Huxley's second wife describes the period in his life from 1948 until his death in 1963, defending and evincing admiration for his experimentation with psychedelic drugs and his use of psychological principles to improve poor vision. According to PW , this is ``a very personal and sensitive portrait . . . serious and deeply emotional.''

2. This Timeless Moment: A Personal View of Aldous Huxley

Book Description Ballantine Books 1971-01-01, 1971. Paperback. Condition: Good. Item is in good condition. Some moderate creases and wear. This item may not come with CDs or additional parts including access codes for textbooks. Might be an ex-library copy and contain writing/highlighting. Photos are stock pictures and not of the actual item. Seller Inventory # DS-0345023986-3