Items related to The Blue World 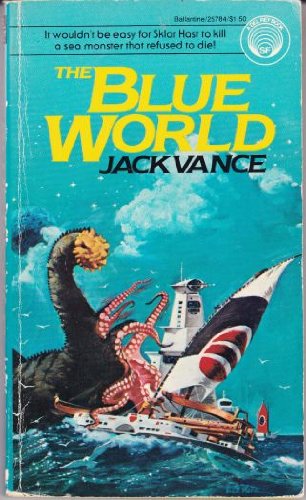 This is classic Vance: a carefully thought-out world, a stratified society, and a man in conflict with its rules. During the space of twelve generations, the descendents of a crash on a water-covered planet have managed to adapt to the marine culture. But they are always at the mercy of the kragen, giant, squidlike monsters. The colonists can communicate with the biggest of these, King Kragen, and must appease him. But finally, one man has had enough of this life of slavery and sacrifice. Can he convince his fellow citizens that they must kill King Kragen? But...how can they do it in a world without weapons?

Jack Vance was born in 1916 and studied mining engineering and journalism at the University of California. During the Second World War he served in the merchant navy and was torpedoed twice. He started contributing stories to the pulp magazines in the mid 1940s and published his first book, The Dying Earth, in 1950. Among his many books are The Dragon Master, for which he won his first Hugo, Big Planet, The Anome and the Lyoness sequence.