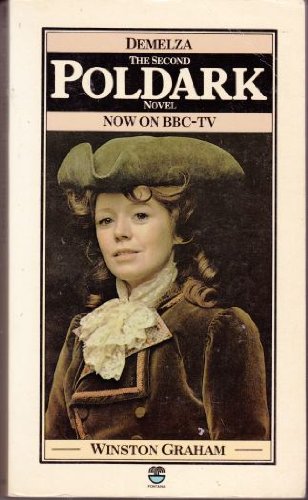 Winston Graham was the author of forty novels. His books have been widely translated and his famous series has been developed into two television series shown in 24 countries. Winston Graham was a Fellow of the Royal Society of Literature and in 1983 was awarded the OBE.

There could have been prophecy in the storm that blew up at the time of Julia's birth.

May month was not a time for heavy gales, but the climate of Cornwall is capri­cious as any child ever born. It had been a kindly enough spring, as kindly as the summer and winter that had gone before it; mild, soft, comfortable weather; and the land was already heavy with green things. Then May broke rainy and gusty, and the blossom suffered here and there and the hay leaned about looking for support.

On the night of the fifteenth, Demelza felt her first pains. Even then for a while she gripped the bedpost and thought the matter all round before she said anything. All along she had viewed the coming ordeal with a calm and philosophical mind and had never troubled Ross with false alarms. She did not want to begin so late. Last evening she had been out in her beloved garden, digging round the young plants; then as it was going dark she had found a disgruntled hedgehog and had played with him, trying to persuade him to take some bread and milk, and had only come in reluctantly as the sky clouded and it went cold.

This now-this thing in the middle of the night-might yet be only the result of getting overtired.

But when it began to feel as if someone was kneeling on her backbone and trying to break it, she knew it was not.

She touched Ross's arm and he woke instantly.

"I think," she said, "I think you will have to fetch Prudie."

"I have a pain," she said primly. "I think twould be as well to fetch Prudie."

He climbed quickly out of bed, and she listened to the scratch of flint and steel. After a moment the tinder caught and he lit a candle. The room flickered into view: heavy teak beams, the curtain over the door moving gently in the breeze, the low window seat hung with pink grogram, her shoes as she had kicked them off, one wooden sole upmost, Joshua's spyglass, Ross's pipe, Ross's book, and a fly crawling.

He looked at her and at once knew the truth. She smiled a pallid apology. He went across to the table by the door and poured her a glass of brandy.

"Drink this. I will send Jud for Dr. Choake." He began to pull on his clothes, anyhow.

Whether Thomas Choake should be called in to her had been a dissension between them for some weeks. Demelza could not forget that twelve months ago she had been a maidservant and that Choake, though only a physician, owned a small estate which, even if it had been bought with his wife's money, put him on a level from which the likes of her would be seen as unimportant chattels. That was until Ross married her. Since then she had grown to her position. She could put on a show of refinement and good manners, and not at all a bad show at that, but a doctor was different. A doctor caught one at a disadvantage. If the pain was bad, she would almost certainly swear in the old way she had learned from her father, not a few genteel "damn mes" and "by Gods," as anyone might excuse from a lady in trouble. To have a baby and be forced to act genteel at the same time was more than Demelza could look forward to.

Besides, she didn't want a man about. It wasn't decent. Her cousin-in-law, Elizabeth, had had him, but Elizabeth was an aristocrat born and bred, and they looked at things different. She would far rather have had old Aunt Betsy Triggs from Mellin, who sold pilchards and was a rare strong hand when it came to babies.

But Ross was the more determined and he had had his way. She was not unprepared for his curt, "Then he shall be woke," as he left the room.

"Ross!" She called him back. For the moment the pain had gone.

"Yes?" His strong, scarred, introspective face was half lit by the candle; the upgrowing dark hair was ruffled and hardly showed its hint of copper; his shirt was open at the throat. This man...aristocrat of them all, she thought...this man, so reserved and reserving, with whom she had shared rare intimacy.

He came back to the bed. The emergency had come on him so quickly in his sleep that he had had no time yet to feel anything but alarm that her time was here and relief that it might soon be over. As he kissed her he saw the moisture on her face and a worm of fear and compassion moved in him. He took her face in his hands, pushed back the black hair, and stared a moment into the dark eyes of his young wife. They were not dancing and mischievous as they so often were, but there was no fear in them.

She made a gesture of dissent. "Don't come back, Ross. Go and tell Prudie, that's all. I'd rather-you didn't see me like this."

"And what of Verity? You specially wanted Verity here."

He kissed her again.

He looked at her in surprise.

"And say you don't love Elizabeth."

"And I don't love Elizabeth." What else was he to say when he did not know the truth himself? He was not a man who spoke his inmost feelings easily, but now he saw himself powerless to help her, and only words of his and not actions would give her aid. "Nothing else matters but you," he said. "Remember that. All my relatives and friends-and Elizabeth, and this house and the mine...I'd throw them in the dust and you know it-and you know it. If you don't know it, then all these months I've failed and no words I can give you now will make it otherwise. I love you, Demelza, and we've had such happiness. And we're going to have it again. Take hold of that, my sweet. Hold it and keep it, for no one else can."

"I'll hold it, Ross," she said, content because the words had come.

He kissed her again and turned and lit more candles, took up one, and went quickly out of the room, the hot grease running over his hand. The wind had dropped since yesterday; there was only a breeze. He did not know the time, but it felt about two.

He pushed open the door on the other side of the landing and went across to the bedroom where Jud and Prudie slept. The ill-fitting bedroom door opened with a long squeak, which merged into Prudie's slow rasping snore. He grunted in disgust, for the hot, close, sweaty smell offended his nose. The night air might be dangerous, but they could surely open the window during the day and let this stink out.

He went across and parted the curtains and shook Jud by the shoulders. Jud's two great teeth showed like gravestones. He shook again, violently. Jud's nightcap came off and a spot of the candle grease fell on his bald patch. Jud woke. He began to curse; then he saw who it was and sat up rubbing his head.

"Demelza is ill." How call her anything but Demelza to a man who had been here when she came as a tattered waif of thirteen? "I want you to go for Dr. Choake at once. And wake Prudie. She will be wanted too."

"What's amiss with her?"

"Her pains have begun."