Items related to The Best of Lester Del Rey

The Best of Lester Del Rey 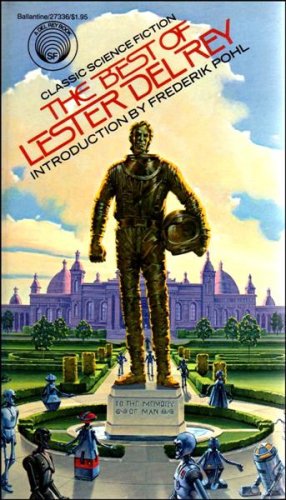 The Pyrotechnics of Lester del Rey

SF's most protean personality--writer, editor, critic, publisher--sets off an incomparable fireworks display in these tales of robots and humans, animals and aliens, ghosts and gods, science and the supernatural . . .

HELEN O'LOY
If you want an ideal mate, build her!

HEREAFTER, INC.
This is Heaven? The hell it is!

LITTLE JIMMY
The invisible kid was a ghost for sure. But whose?

INSTINCT
The robots labored to re-create the extinct human species--
but there was one element they somehow left out.

FOR I AM A JEALOUS PEOPLE
"In God We Trust" is a great motto--until you find you can't.

And much more!
From the Trade Paperback edition.

Winner of the prestigious Nebula Grand Master Award, Lester del Rey was the author of more than forty books, including such classic science fiction novels as Nerves and The Eleventh Commandment and nonfiction works on atomic power, oceanography, photography, and many other science-related topics. His stories have appeared in numerous magazines and anthologies. In 1977, he and his wife, Judy-Lynn del Rey, formed Del Rey Books. Judy-Lynn became Editor-in-Chief, and Lester served as Fantasy editor discovering many authors who later became bestsellers, including Terry Brooks, David Eddings, Barbara Hambly, and Stephen R. Donaldson.
From the Trade Paperback edition.

1. The Best of Lester Del Rey

2. The Best of Lester Del Rey

3. The Best of Lester Del Rey

4. The Best of Lester Del Rey

Book Description Condition: Good. A+ Customer service! Satisfaction Guaranteed! Book is in Used-Good condition. Pages and cover are clean and intact. Used items may not include supplementary materials such as CDs or access codes. May show signs of minor shelf wear and contain limited notes and highlighting. Seller Inventory # 0345273362-2-4

5. The Best of Lester del Rey

6. The Best of Lester del Rey

7. The Best of Lester Del Rey

8. The Best of Lester Del Rey

9. The Best of Lester del Rey

Shipping: US$ 16.78
From United Kingdom to U.S.A.
Destination, rates & speeds

10. The Best of Lester Del Rey