Items related to THE BOYS ON THE BUS

Crouse, Timothy THE BOYS ON THE BUS

THE BOYS ON THE BUS 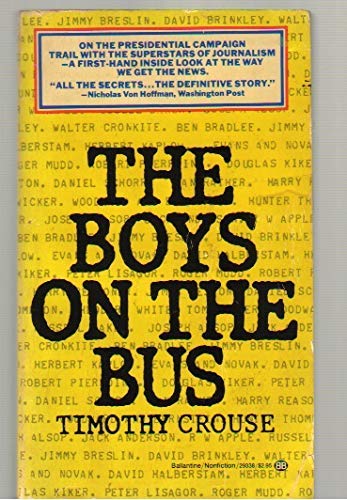 Reporter Timothy Crouse's behind-the-scenes coverage of the political press corps during the 1972 presidential campaign. An enlightening study in journalism and the political process. Photographs, Index.

Political spin-doctoring has become something of an art form in the last few decades. It was less artful in the early years of the information age, and Crouse's entertaining look at the attempts of both the Nixon and McGovern '72 campaign staffs to control the media seems almost comical, so poor were they at the image-and-sound bite manipulation that now defines our politics. Crouse is a serious-minded journalist, however, and his firsthand report on how political news is made and shaped remains important reading. Check out Hunter S. Thompson's Fear and Loathing on the Campaign Trail '72 for a more madcap view of the same matters.

Cheap booze. Flying fl eshpots. Lack of sleep. Endless spin. Lying pols.
Just a few of the snares lying in wait for the reporters who covered the 1972 presidential election. Traveling with the press pack from the June primaries to the big night in November, Rolling Stone reporter Timothy Crouse hopscotched the country with both the Nixon and McGovern campaigns and witnessed the birth of modern campaign journalism. The Boys on the Bus is the raucous story of how American news got to be what it is today. With its verve, wit, and psychological acumen, it is a classic of American reporting.

2. THE BOYS ON THE BUS Crouse, Timothy

3. THE BOYS ON THE BUS Crouse, Timothy