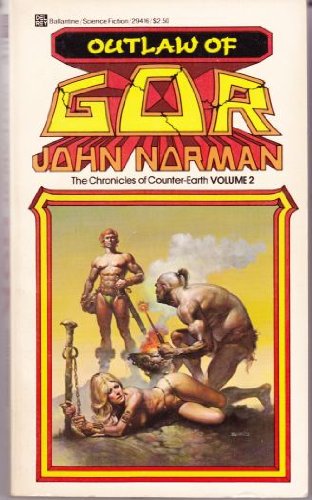 In this second volume of the Gorean Series, Tarl Cabot finds himself transported back to Counter-Earth from the sedate life he has known as a history professor on Earth. He is glad to be back in his role as a dominant warrior and back in the arms of his true love. Yet, Tarl finds that his name on Gor has been tainted, his city defiled, and all those he loves have been made into outcasts. He is no longer in the position of a proud warrior, but an outlaw for whom the simplest answers must come at a high price. He wonders why the Priest Kings have called him back to Gor, and whether it is only to render him powerless. Coinciding with the 40th anniversary of the first book of the Gorean Saga, TARNSMAN OF GOR, E-Reads is proud to release the very first complete publication of all Gor books by John Norman, in both print and ebook editions, including the long-awaited 26th novel in the saga, WITNESS OF GOR. Many of the original Gor books have been out of print for years, but their popularity has endured. Each book of this release has been specially edited by the author and is a definitive text.

John Norman is creator of the Gorean Saga, a series of novels spanning dozens of titles that began in 1967 with TARNSMAN OF GOR and that are considered to be cult classics. He has also produced a three-installment fictional series, Telnarian Histories, plus two other fiction works and a nonfiction paperback entitled IMAGINATIVE SEX. He continues to write new novels in the Gorean saga, notably WITNESS OF GOR (2002) and PRIZE OF GOR (2008), both published by E-Reads. At Gor Chronicles, a web site specially created for his tremendous fan following, one may read everything there is to know about this unique fictional culture. Mr. Norman was born in Chicago, Illinois in 1931. He is married and has three children.

Book Description Del Rey, 1980. Mass Market Paperback. Condition: Good. This item shows signs of wear from consistent use, but it remains in good condition and works perfectly. All pages and cover are intact , but may have aesthetic issues such as small tears, bends, scratches, and scuffs. Spine may also show signs of wear. Pages may include some notes and highlighting. May include "From the library of" labels. Satisfaction Guaranteed. Seller Inventory # 4BQG5300B7Y5_ns

Book Description Del Rey Books, 1999. Novel - Softcover. Condition: Very Good. Del Rey Books Science Fiction Novels (Del Rey Books) Chronicles of Counter-Earth, The #2 - Outlaw of Gor (1980 Printing) (VG+) Manufacturer: Del Rey Books Product Line: Science Fiction Novels (Del Rey Books) Type: Novel - Softcover Copyright Date: 1980 Author: John Norman Page Count: 254 Please review the condition and any condition notes for the exact condition of this item. All pictures are stock photos. The condition of the item you will receive is VG+. Our grading system is explained in the terms of sale section of our bookseller page. Please feel free to contact us with any questions. Product Description: Tarl Cabot's long exile was over. Again he was back on Gor, the strange world of Counter-Earth, where he had once been the proudest warrior and mightiest tarnsman of that savage planet. But nothing was as it had been. His home city of Ko-ro-ba was destroyed, razed until not one stone remained standing. His beautiful mate, Talena, was dead or vanished. His family and friends were scattered across the globe. And Cabot was now declared an outlaw, with all men ordered to kill him on sight. His only chance was to find the strange Priest-Kings who ruled Gor and to submit himself to them. But Tarl Cabot was not about to submit!. Seller Inventory # 2149083711