Items related to Off Season 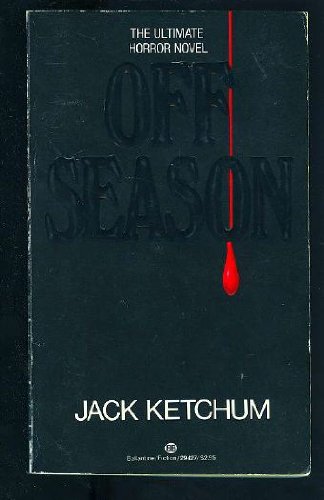 A beautiful New York editor retreats to a lonely cabin on a hill in the quiet Maine beach town of Dead River€”off season€”awaiting her sister and friends. Nearby, a savage human family with a taste for flesh lurks in the darkening woods, watching, waiting for the moon to rise and night to fall.

Twenty years ago....It shocked horror fans everywhere -- Jack Ketchums OFF SEASON, the brutal and harrowing story of an inbred family of cannibals in present-day Maine. Some readers were horrified, others outraged. Yet no one could put the book down. An instant cult classic. Jack Ketchum is a Bram Stoker award winning author who is also the author of The Girl Next Door, RED, Offspring the sequel to Off Season. All of these titles have been produced for film and are also available on DVD>

What Stephen King says About OFF SEASON: Whos the scariest guy in America? Probably Jack Ketchum, the outlaw horror writer whose terrifying first novel is finally available uncut from Overlook Connection Press. That would be OFF SEASON: The Unexpurgated Edition. If you read it on Thanksgiving, you probably wont sleep until Christmas. Dont say your uncle Stevie didnt warn you (heh-heh-heh). ---- Stephen King

They had Hunted every animal but there was no flesh like mans . . . Welcome to Jack Ketchums ferocious and unforgettable first novel, Off Season. Originally published in 1981, Off Season was a defining moment of contemporary horror fiction, an instant classic whose impact on the writing and reading of horror continues today... ...when I read Off Season, I knew that its writer was different; that he was working from that raw and risky perspective known as personal vision, and that he had written a novel that was his own, and not what a publisher wanted or expected. Stocked in the shadows of bestsellers and a blur of Stephen King wannabes, Off Season was issued as a paperback original by Ballantine -- a publisher who has never shown much enthusiasm for the fiction of fear. The cover was a minimalist triumph, its title embossed in black on black, stained with a red thread of blood. The authors name -- a pseudonym -- was reported in white block capital letters, and the top of the cover announced:"THE ULTIMATE HORROR NOVEL." The hyperbole was deserved. Off Season was the genuine article, its horror insistent, visceral, and disturbing. --Douglas E. Winter, from the Introduction

Just when you think the worst has already happened... Jack Ketchum goes yet another shock further! ---- Fangoria