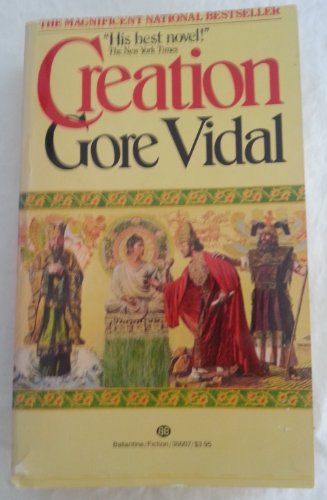 Once again the incomparable Gore Vidal interprets and animates history -- this time in a panoramic tour of the 5th century B.C. -- and embellishes it with his own ironic humor, brilliant insights, and piercing observations. We meet a vast array of historical figures in a staggering novel of love, war, philosophy, and adventure . . .
"There isn't a page of CREATION that doesn't inform and very few pages that do not delight."
-- John Leonard, The New York Times

In 445 B.C., Cyrus Spitama, the grandson of the prophet Zoroaster, is the Persian ambassador to the city of Athens. He has a rather caustic appreciation of his situation: "I am blind. But I am not deaf. Because of the incompleteness of my misfortune, I was obliged yesterday to listen for nearly six hours to a self-styled historian whose account of what the Athenians like to call 'the Persian Wars' was nonsense of a sort that were I less old and more privileged, I would have risen to my seat at the Odeon and scandalized all Athens by answering him." Having thus dismissed Herodotus, Cyrus then dictates his life story to his nephew, Democritus, with similar disdain for the Greeks--whom we in the modern world have come to view as the progenitors of civilization, but whom Cyrus considers to be bad-smelling rabble.

Of course, Cyrus Spitama speaks with a very modern, ironic voice supplied to him by Gore Vidal--and the political intrigues in which Cyrus finds himself immersed are likewise familiar territory for fans of Vidal's historical fiction. But the narrator's delightfully wicked observations are the icing on a narrative of truly epic scope--out of his desire to understand the origins of the world, Cyrus undertakes journeys to India, where he encounters disciples of the Buddha, and China, where he engages Confucius in philosophical conversation while the great sage fishes by the riverside. Creation offers insights into classical history laced with scintillating wit and narrative brio.

A sweeping novel of politics, war, philosophy, and adventure-in a restored edition, featuring never-before-published material from Gore Vidal's original manuscript-Creation" offers a captivating grand tour of the ancient world.
Cyrus Spitama, grandson of the prophet Zoroaster and lifelong friend of Xerxes, spent most of his life as Persian ambassador for the great king Darius. He traveled to India, where he discussed nirvana with Buddha, and to the warring states of Cathay, where he learned of Tao from Master Li and fished on the riverbank with Confucius. Now blind and aged in Athens-the Athens of Pericles, Sophocles, Thucydides, Herodotus, and Socrates-Cyrus recounts his days as he strives to resolve the fundamental questions that have guided his life's journeys: how the universe was created, and why evil was created with good. In revisiting the fifth century b.c.-one of the most spectacular periods in history-Gore Vidal illuminates the ideas that have shaped civilizations for millennia."