Items related to The Chronicles of Thomas Covenant, the Unbeliever

Donaldson, Stephen R. The Chronicles of Thomas Covenant, the Unbeliever

The Chronicles of Thomas Covenant, the Unbeliever 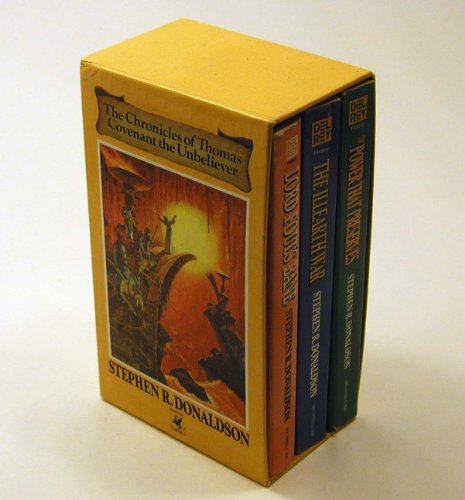 The acclaimed fantasy epic, together in one volume.

Stephen Donaldson was born in 1947 in Cleveland, Ohio. Between the ages of three and sixteen he lived in India, where his father, an orthopaedic surgeon, worked with leprosy sufferers. This inspired his fictional character, Thomas Covenant. Donaldson served two years as a conscientious objector doing hospital work in Akron, then attended Kent State University, where he received his M.A. in English in 1971. He now lives in Albuquerque, New Mexico.

1. The Chronicles of Thomas Covenant, the Unbeliever

Book Description Ballantine Books (P) 1984-06-01, 1984. Paperback. Condition: Good. Item is in good condition. Some moderate creases and wear. This item may not come with CDs or additional parts including access codes for textbooks. Might be an ex-library copy and contain writing/highlighting. Photos are stock pictures and not of the actual item. Seller Inventory # DS-0345313283-3