Items related to Tarzan of the Apes: A Tarzan Novel

Burroughs, Edgar Rice Tarzan of the Apes: A Tarzan Novel

Tarzan of the Apes: A Tarzan Novel 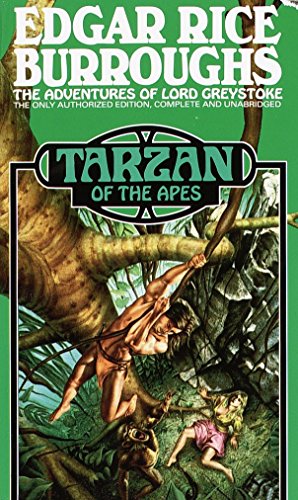 Deep in the savage African jungle, the baby Tarzan was raised by a fierce she-ape of the tribe of Kerchack. There he had to learn the secrets of the wild to survive—how to talk with animals, swing through the trees, and fight against the great predators. He grew to the strength and courage of his fellow apes. And in time, his human intelligence promised him the kingship of the tribe. He became truly Lord of the Jungle.

Then men entered his jungle, bringing with them the wanton savagery of civilized greed and lust—and bringing also the first white woman Tarzan has ever seen. Now suddenly, Tarzan had to choose between two worlds. . . .

The first time I ever went to Tarzana, California, I walked down Ventura Boulevard, noticing that all of the buildings were really ugly. Then I arrive at my destination: a small house, set back from the street, with a beautiful tree shading the entire front yard. Inside, the air was cool and everything was polished wood, especially the incredible, gigantic desk. That's where he worked. It was awesome.

Edgar Rice Burroughs had a huge California ranch, and the land eventually became a town, named for Burroughs's most famous character. Burroughs created one of the few heroes everyone knows, and at that desk, he took Tarzan to exotic lands, had him face bizarre creatures and endless, exotic challenges. Those adventures spirit the reader away to a timeless time of action and heroism. And sitting in that office, I was a permanent convert. For me, and for countless others, the legend will never cease. And that's as it should be.
--Steve Saffel, Senior Editor

1. Tarzan of the Apes (Tarzan (Ballantine))

2. Tarzan of the Apes: A Tarzan Novel

3. Tarzan of the Apes: A Tarzan Novel

4. Tarzan of the Apes: A Tarzan Novel

5. TARZAN OF THE APES: A TARZAN NOV

6. Tarzan of the Apes: A Tarzan Novel Burroughs, Edgar Rice