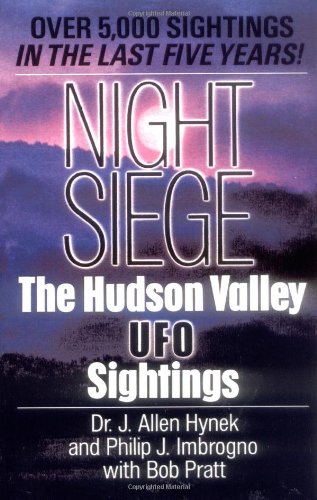 New Year's Eve 1982 marked the beginning of one of the most puzzling UFO cases in recent times: the Hudson Valley "siege." The siege begot over 7,000 sightings of a boomerang-shaped craft or crafts moving silently through the sky over New York and Connecticut between 1982 and 1995. Night Siege is the collaborative effort of Hynek, Imbrogno, and Pratt to report the data gathered from witnesses of this mystifying experience, without speculation of what it might be. If you missed the first edition of Night Siege, this is your chance to delve into the Hudson Valley mystery. If you have read the first edition, you may be interested in the additional data covering sightings from 1986 to 1995, the graphical analysis of the UFO's appearance, and the chronology of the sightings. Aside from the purely factual value of the catalog of reports in Night Siege, its coverage of an undeniable series of events that somehow went largely untouched by the local authorities and the national media invites speculation into the origins of these silent objects. --Brian Patterson

The Hudson Valley is just minutes away from New York City—but something strange has been taking place there. You can learn about it in Night Siege by Dr. J. Allen Hynek, Philip J. Imbrogno, and Bob Pratt.

Curiously, the agencies responsible for protecting us—law enforcement agencies, state and federal governments, and the military—are not saying anything . . . or are deliberately ignoring it. Why?

A large, boomerang-shaped object hovering over the area was seen by hundreds of people. It moved slowly and was reported as moving silently or with a humming sound. Yet, the Federal Aviation Administration, which monitors the air lanes where the object was sighted, persists in denying its existence. Why?

Nothing has been heard from the nation's scientists. Why?

Even though the U.S. has one of the most extensive mass communications systems in the world, news of this astounding happening was carried on only one network. Why?

Llewellyn is proud to present Night Siege, the most complete examination of this strange, continuing situation. The truth is not just "out there," it is also in this book. If you want to know what is going on in the most unusual UFO sightings ever, you must get Night Siege.