Items related to Getting To Know Jesus

MacDonald, George Getting To Know Jesus

Getting To Know Jesus 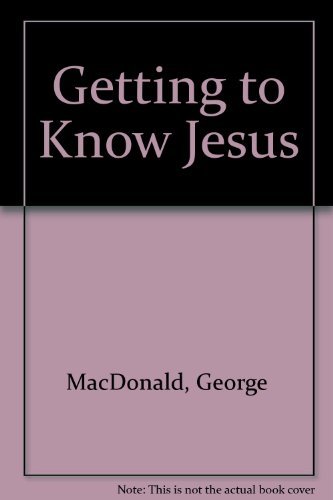 George MacDonald (1824-1905), Scottish children's author and novelist, was educated at Aberdeen University before training as a Congregational minister. Finding his own individualistic views unacceptable to his parish, he gradually turned to literature. He published over fifty volumes of fiction, verse, children's stories, and sermons but is remembered chiefly for his fairy stories, including The Princess and the Goblin (1872) and its sequel The Princess and Curdie (1873).

Scottish author George MacDonald's fantasies influenced both J. R. R. Tolkien and C. S. Lewis, but before he wrote fiction, he was a Congregationalist minister. These 12 sermons, which focus on the nature of Christ, are as intelligent as his fiction. However, they seem fierce, combative, and dated in ways that his fiction does not. Lloyd James does what he can with the sermons. His delivery is impassioned, and listeners can readily imagine the minister's body writhing with passion. While the sermons are intended to give guidance and inspiration, listeners can also hear the genesis of MacDonald's fictional talents in his imaginings about the mind and intent of God. G.T.B. © AudioFile 2006, Portland, Maine-- Copyright © AudioFile, Portland, Maine

1. Getting To Know Jesus MacDonald, George

2. Getting To Know Jesus MacDonald, George